Hello awesome Friends! I have a sweet makeover for y’all today!

I must have passed by this tray at the Antique Mall where I have my booth at least a dozen times: 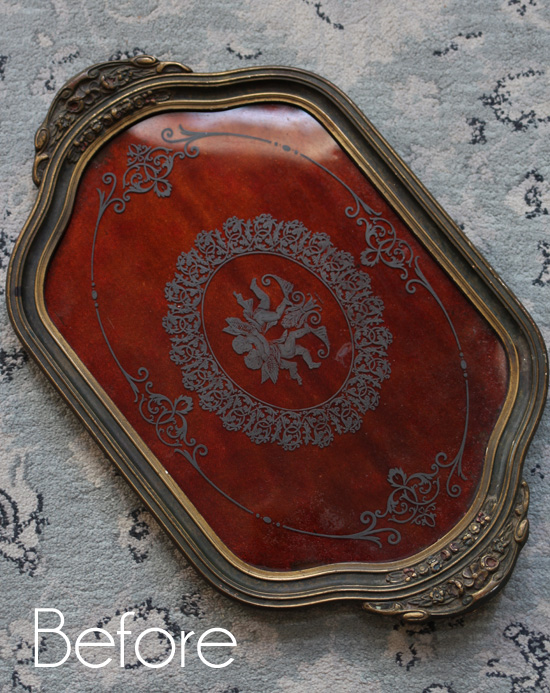 I just loved the details of the frame.

I finally decided to just buy it already. I thought maybe I could put some pretty fabric under the glass, only when I removed the outermost felt layer on the back, I discovered mold between the layers… 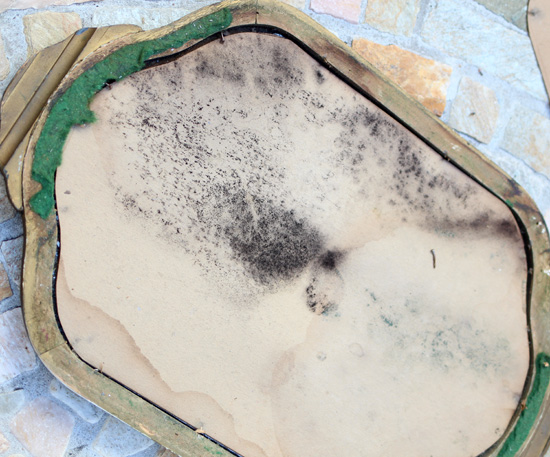 Gross! Then I discovered the glass was not clear, but covered in foil-like paper… 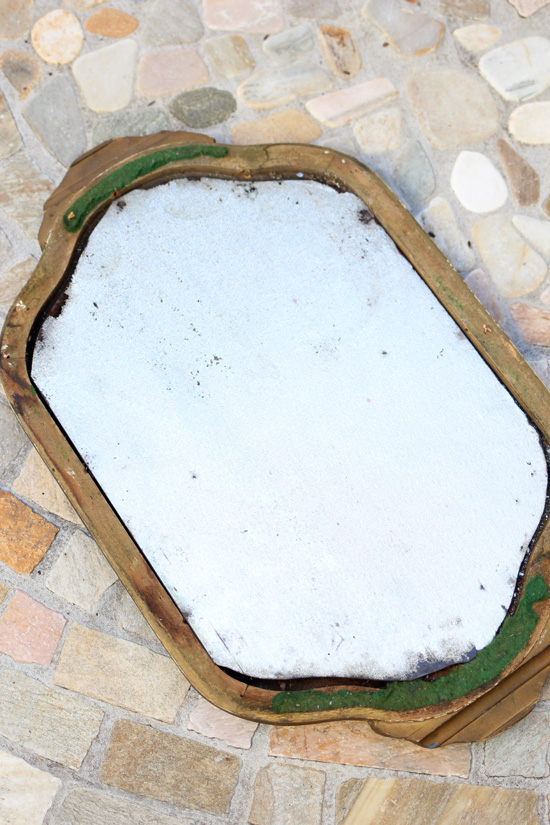 I have included a few affiliate links so you can find the products I used. Read my full disclosure here.

After scraping it with a razor blade, the glass looked terrible, so on to plan B…I decided to cut a new bottom for the tray using hardboard with my jig saw: 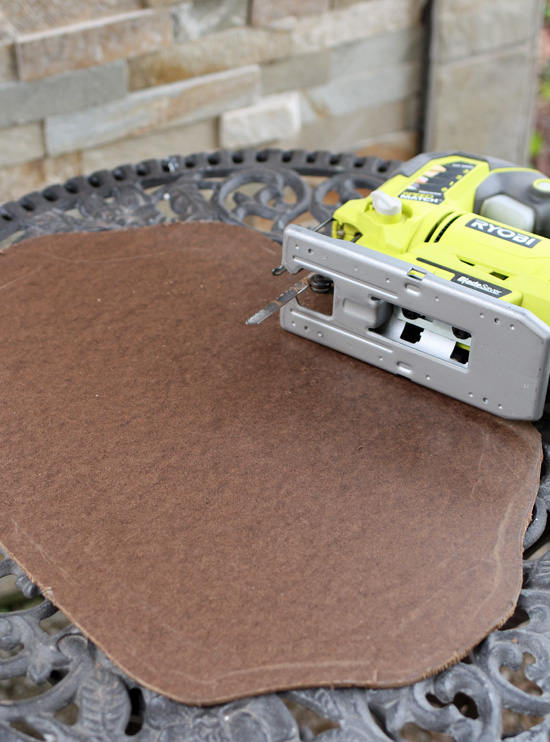 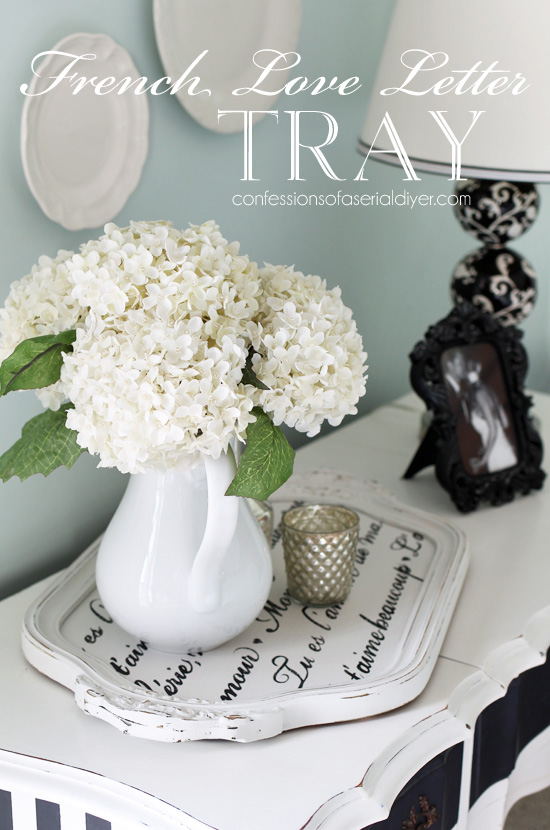 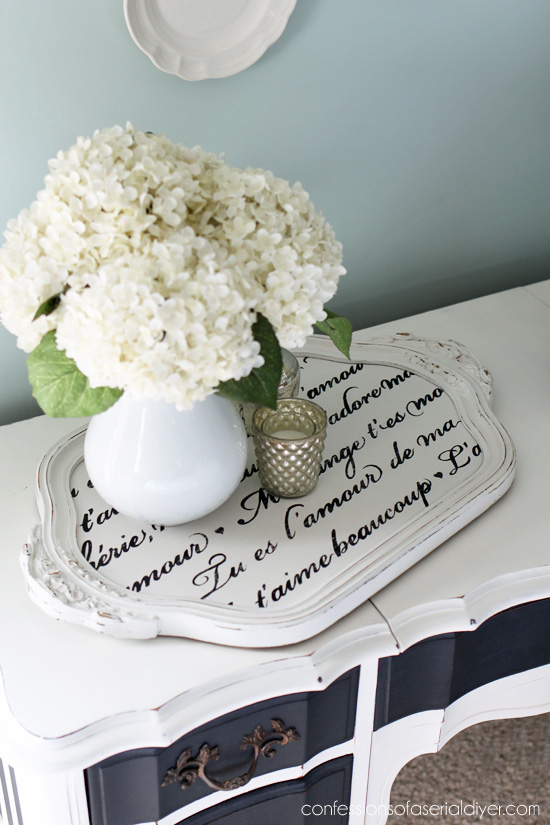 I had hoped to keep that glass top intact with the tray, but this is a pretty alternative. Honestly I was happy to remove everything that may have come in contact with that mold.

The stencil I used is this one from Royal Design Studio. I originally bought it for another piece of furniture. This stencil is another option that is a bit less expensive.

I used spray adhesive (just sprayed the back of the stencil) to hold the stencil in place. Then I used a small brush and this paint to paint in the stencil, trying to brush away from the edges as I went. 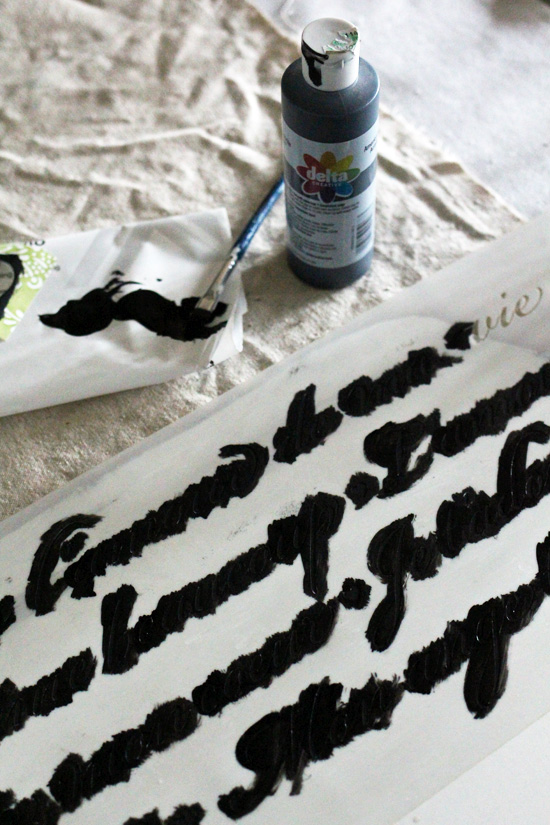 After removing the stencil, you could see all the breaks in the letters, a dead giveaway that it is a stencil: 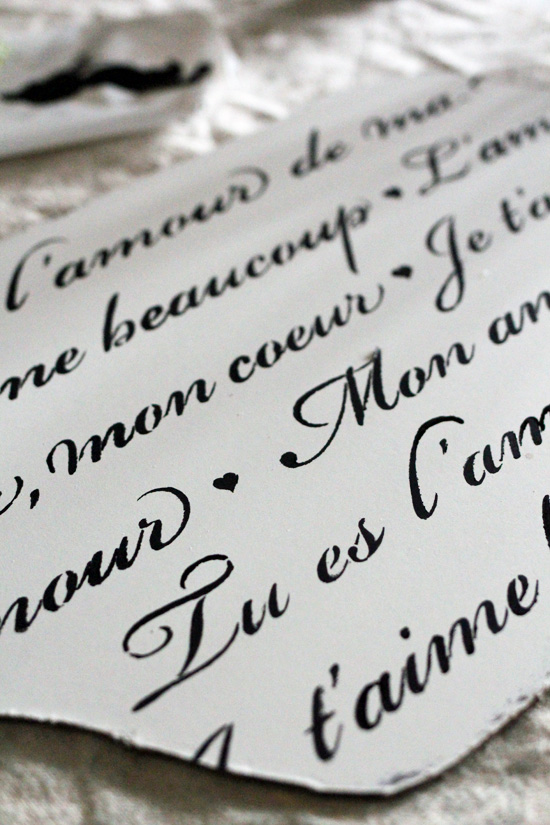 I went back with this script liner brush and filled in the breaks and fixed any bleeding edges: 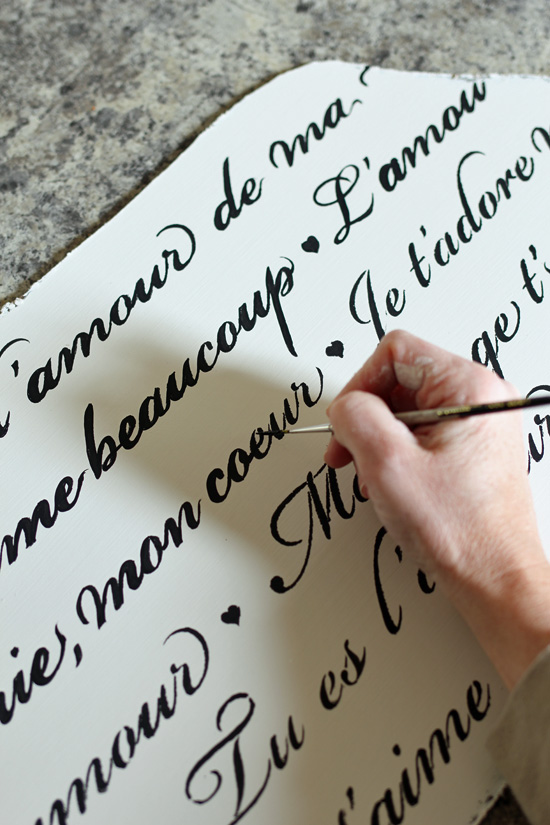 I lightly sanded the surface with 220 grit sandpaper after the paint had plenty of time to dry. This smoothed out any rough spots.

It looks so much less like a stencil now: 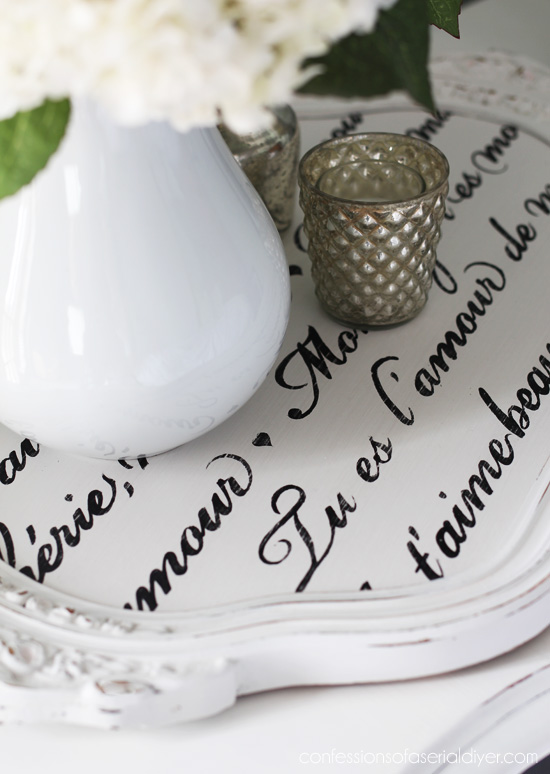 I prefer to use a brush rather than a “pouncer” to stencil because I just think it looks better, even if I do have to go back and touch it up a bit. 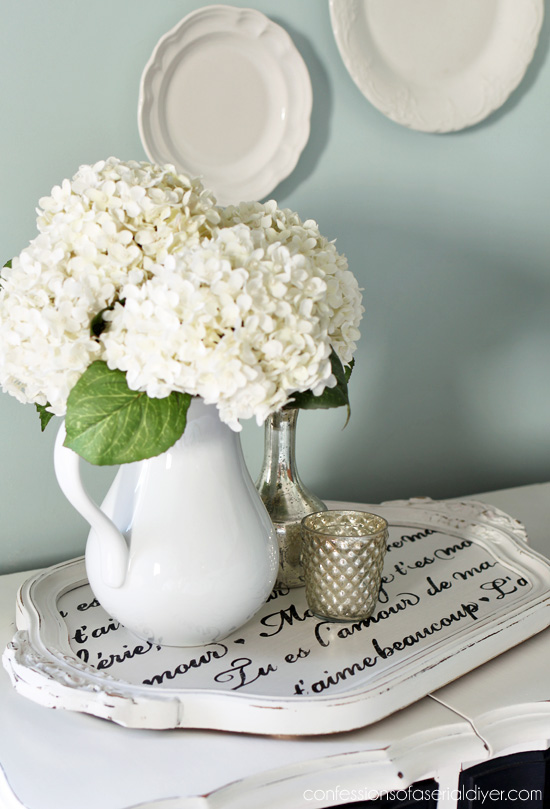 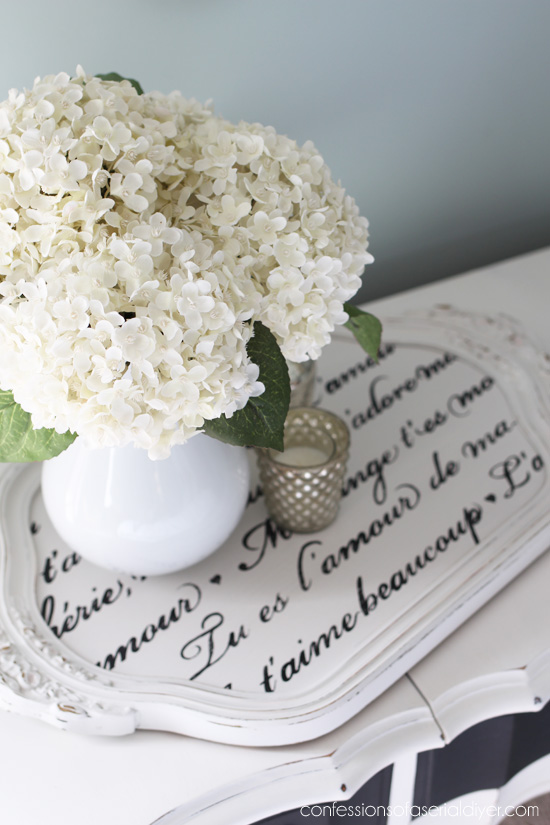 I loved the original patina of the frame, but the white paint and a little sanding brings out those pretty details so well. 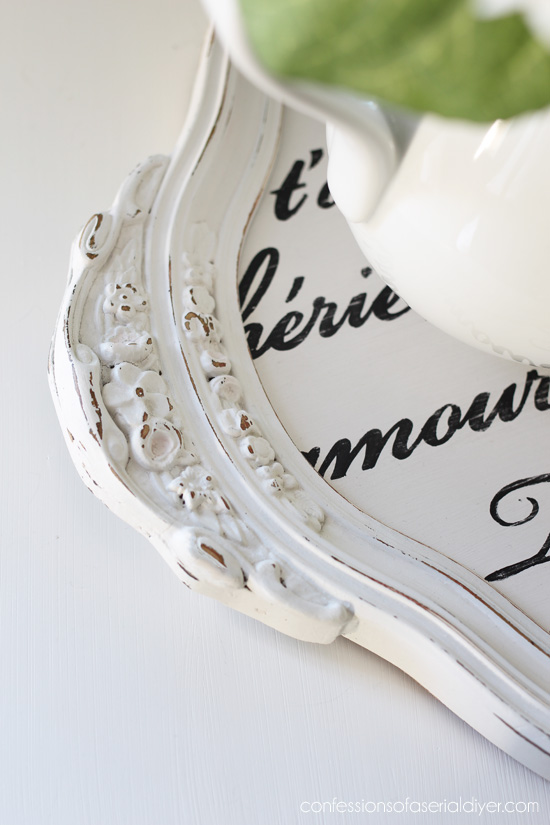 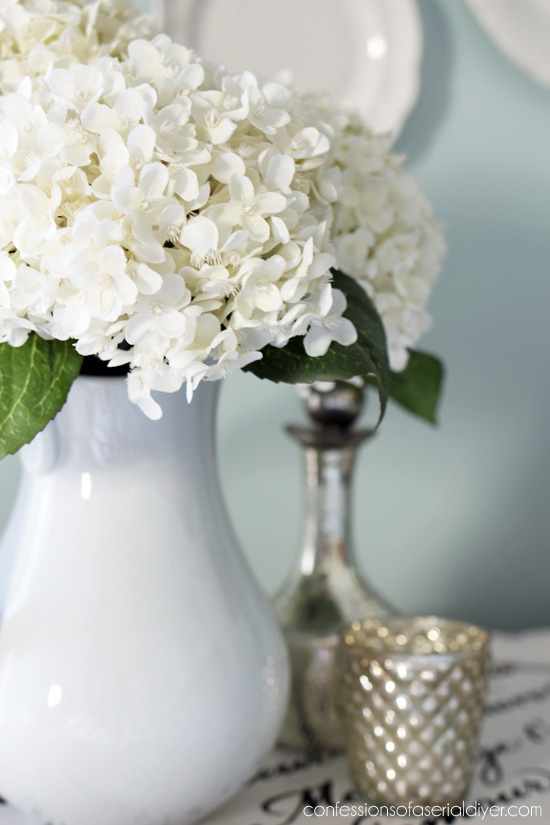 I used my point driver to secure the hardboard to the frame, then covered the bottom in pretty paper. I added felt discs to the bottom as well to protect the furniture beneath. 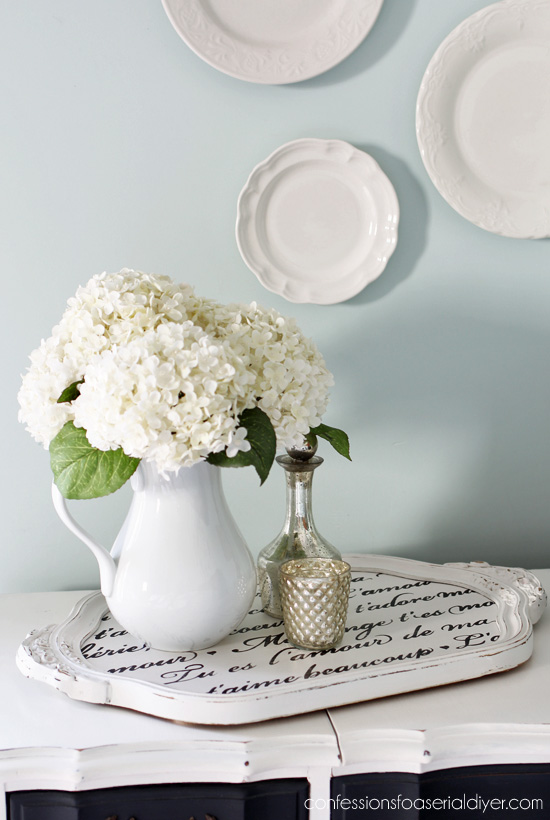 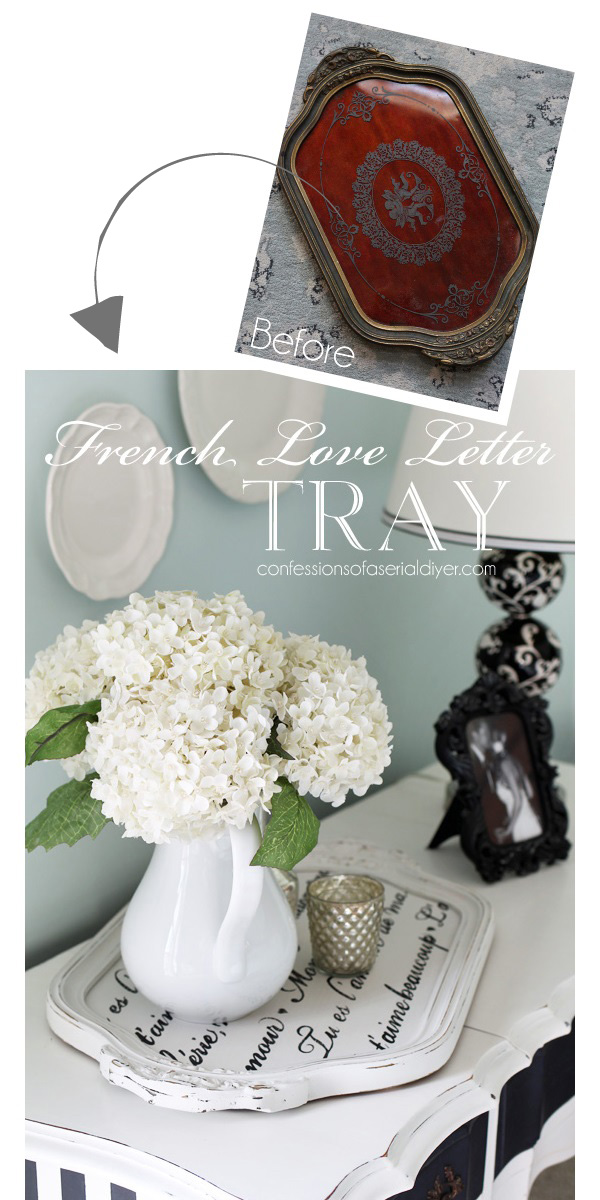 If you enjoyed this makeover, you’ll probably like this one too: 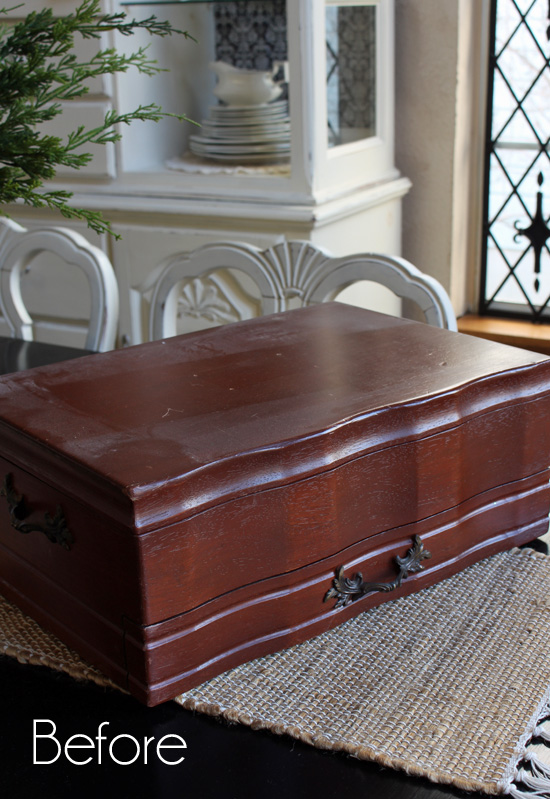 See how I transformed this old flatware box HERE!

I’ll see you Tuesday with the makeover of this $5 yard sale tray: 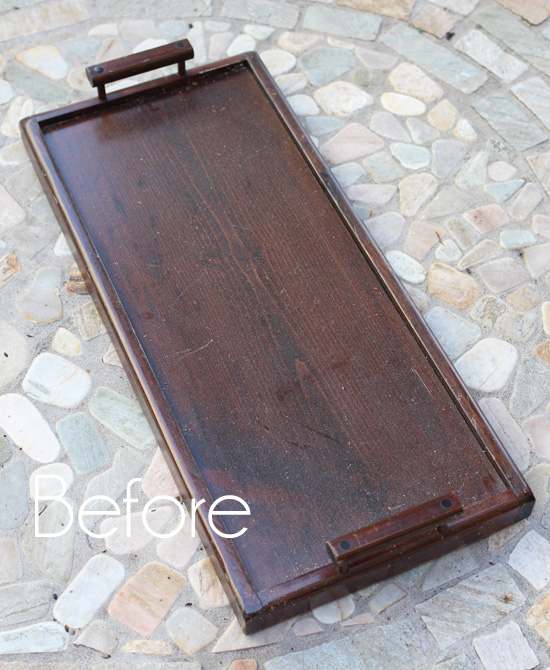 UPDATE: See what this tray looks like now (is it even still a tray?) HERE!