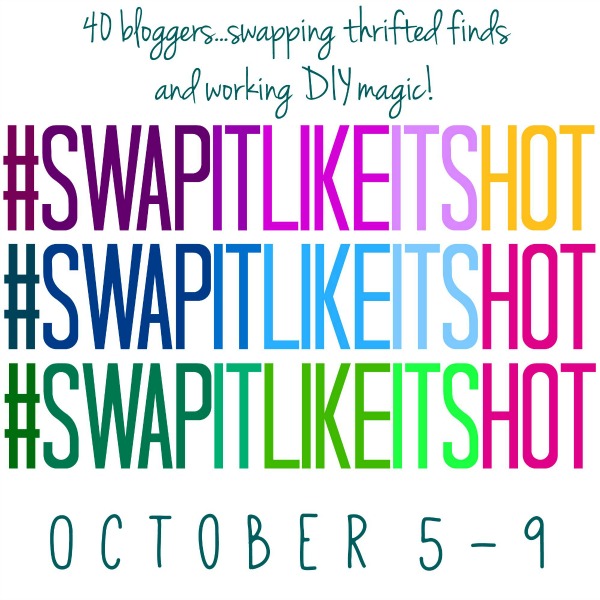 Hi Friends! Have I got a fun post for you today! It’s time once again for Swap it Like It’s Hot hosted by the very fun Charlotte of Ciburbanity!  This challenge is where we go to the thrift store and find a bunch of crap, then send it to another blogger to make over. In turn we also received a box of crap, only my crap was good. Real good, ya’ll.

Here is what the talented Kimm from Reinvented sent to me this round: 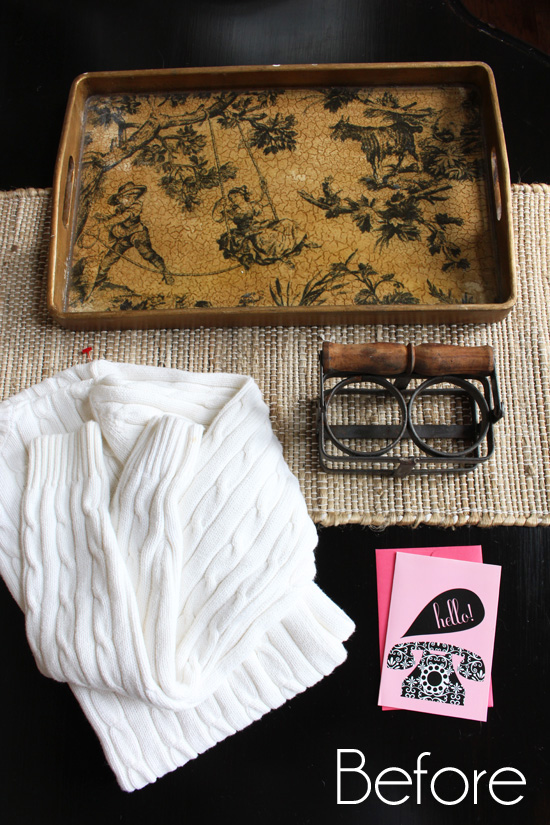 I’m guessing the metal thingy was maybe a salt and pepper shaker holder? Anyway I thought it was pretty cool. There’s so much you can do with a sweater (I actually tried it on…thought about keeping it to wear 😉 ), and a tray is always a good makeover option.

My plan was to use all three pieces to make a Fall vignette.

One didn’t make the cut, but the other two did.

Here’s what I came up with… 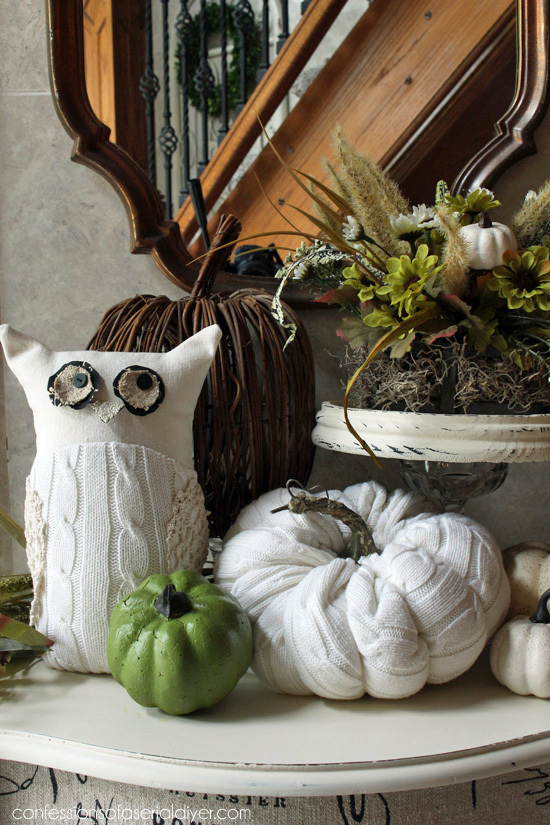 The sweater provided endless possibilities! Can you see what else made the cut? 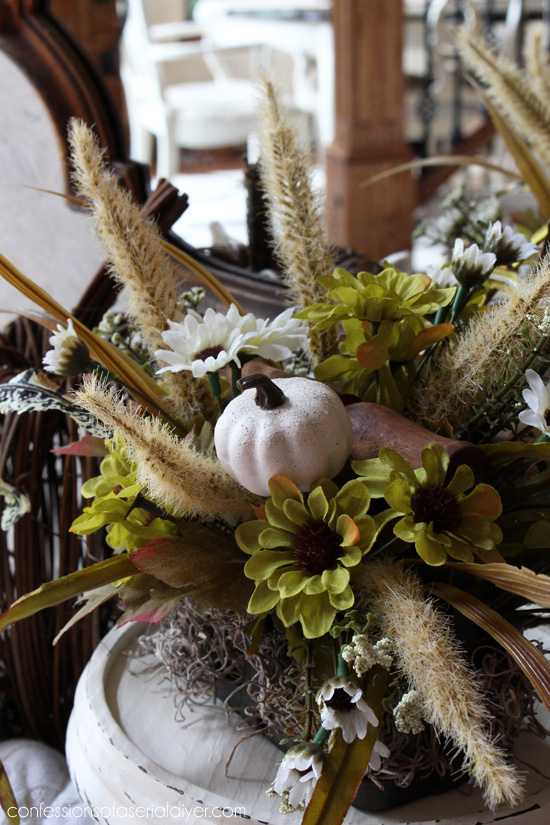 I added floral foam to the bottom, covered that in moss and added floral stems left over from my Fall Lantern Centerpiece.  I topped it off with a mini white pumpkin from my Mini Pumpkin Garland supplies.

The owl is probably my favorite though. 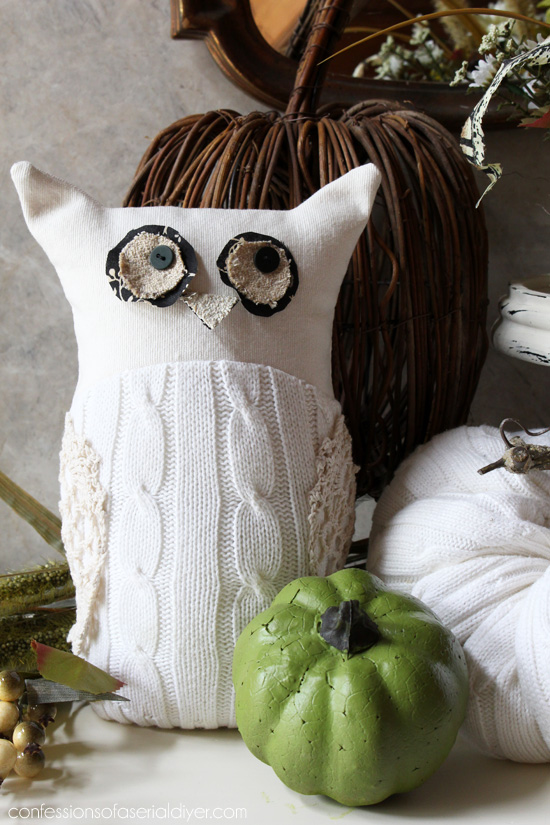 I used some fabric scraps and pieces of an old crocheted table runner along with the sweater to create him.

With what was left from the sweater, I made this big pumpkin: 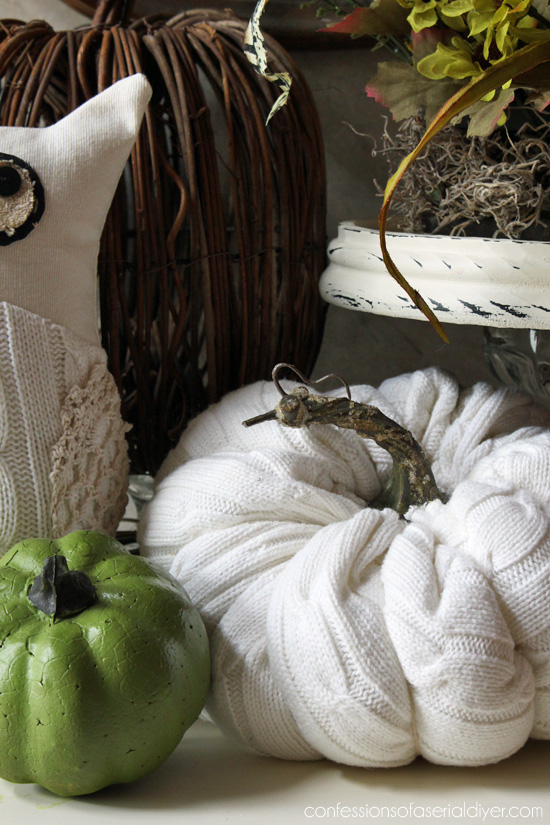 I had never made a sweater pumpkin before, but this was pretty simple. To make it, I cut out a circle from the sweater, and gathered it all around the edges using a large needle and crochet thread. 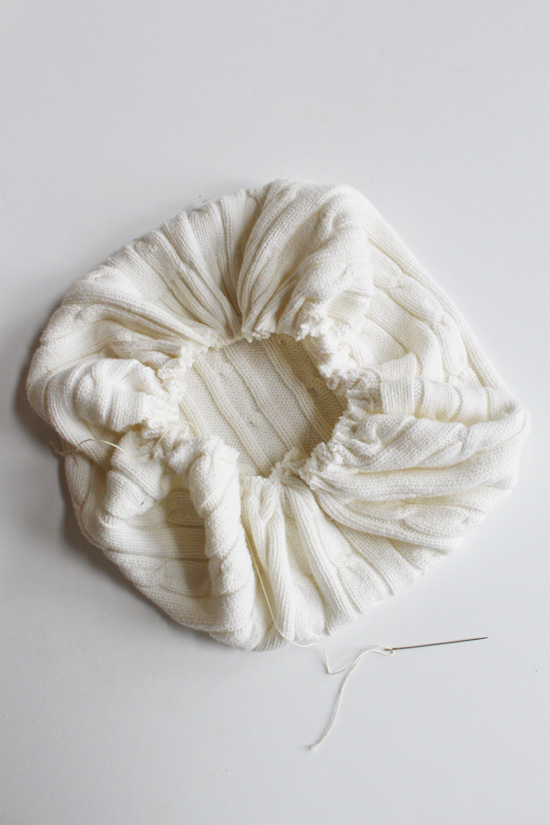 Then I stuffed it with polyfil, and pulled the thread tightly and knotted it. I couldn’t get it to close super tightly because of the thickness of the sweater, but luckily the stem I stole from a not-so-pretty pumpkin was large enough to cover the opening. I used the crochet thread to make the divided areas evenly all around.

The owl was pretty simple to make as well.

If you’ve got an old sweater and want a little hooter of your own, here’s how I did it…

First I sketched a pattern and cut it out. (You may want to use fabric scraps first to test out your pattern before cutting into your sweater, to make sure you will like the look and shape of it.)

Here’s a quick pictorial for the rest: 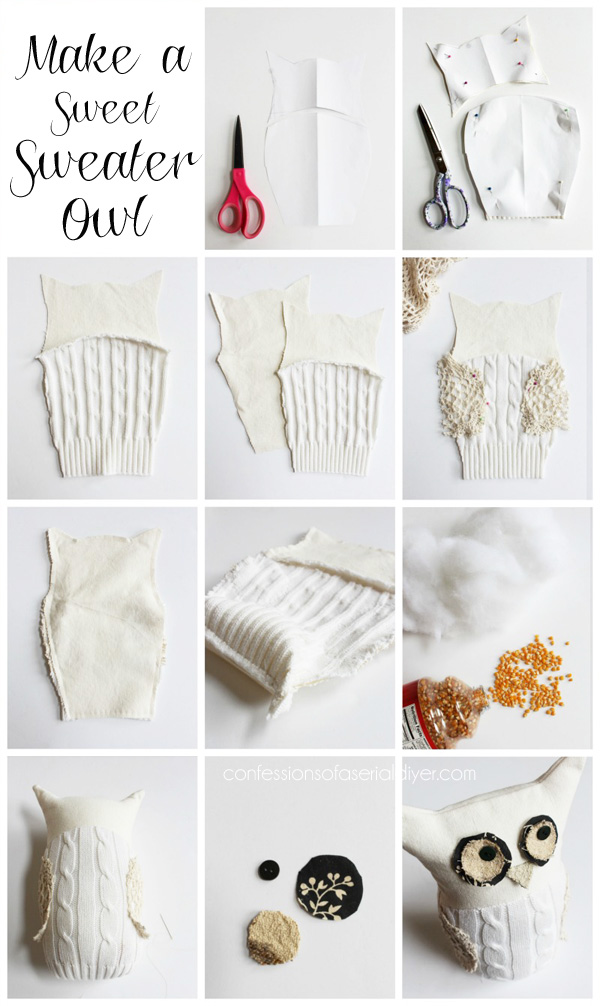 I left an opening on the side to fill it, and stuffed the top with polyfil, then added popcorn kernels to the bottom, to give to give it some weight so it would sit easily. 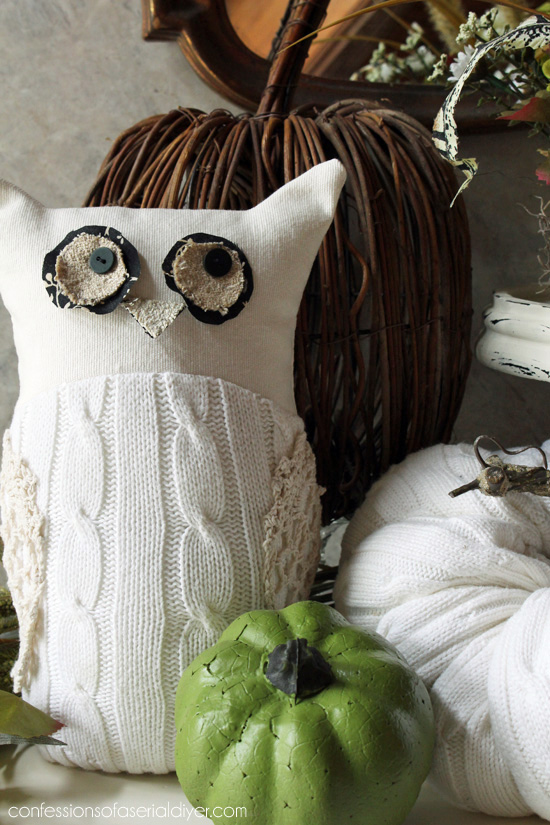 He’s the star of this neutral Fall vignette.

Unfortunately the tray did not make the cut. I was planning to use it as is for the base of this vignette since it was kind of a Fall color already, but it was too small (or I made my pumpkin to dang big!) and I just couldn’t make it work. 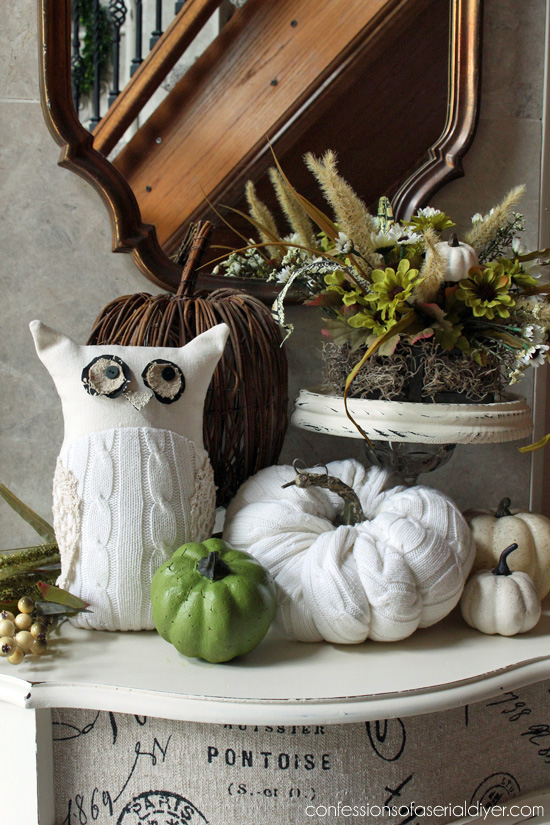 The grapevine pumpkin came from Walmart  a few years back. It was part of my Thrifty Fall Décor last year. 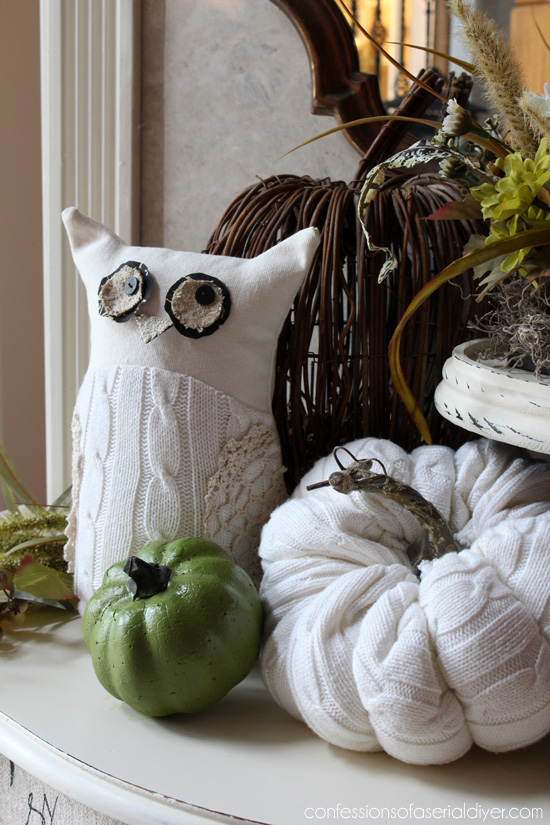 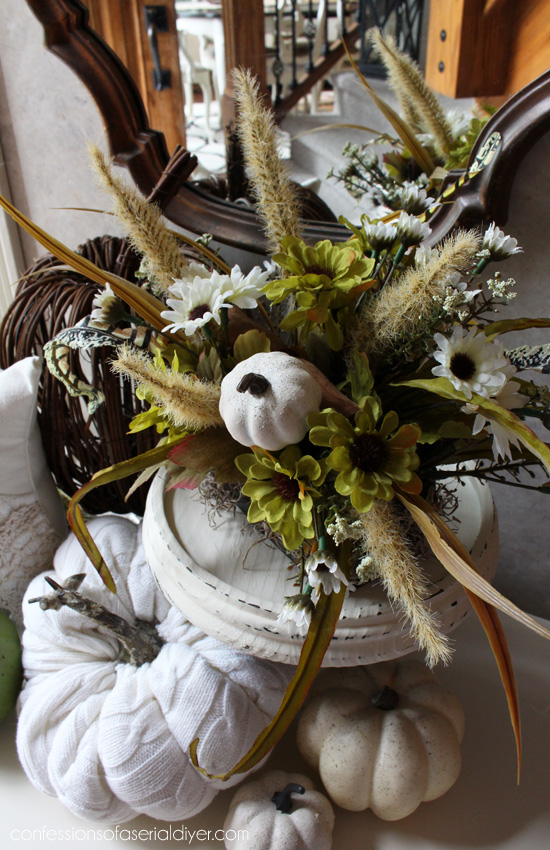 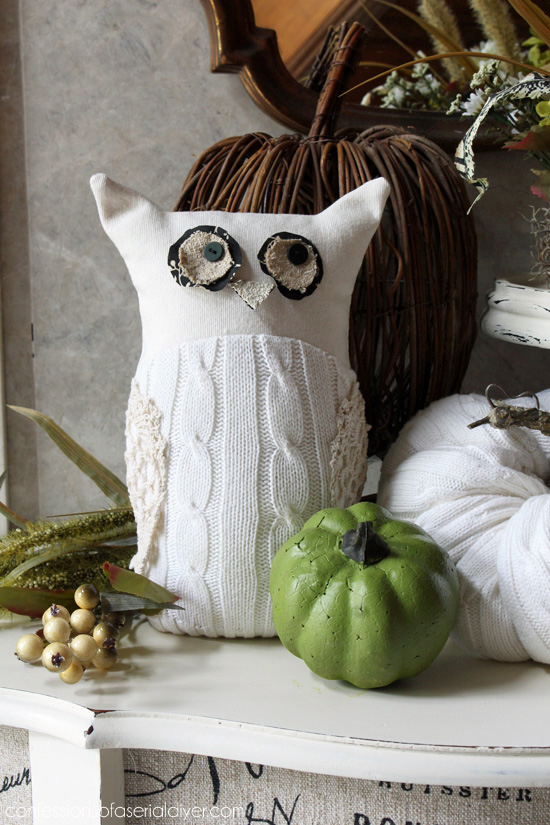 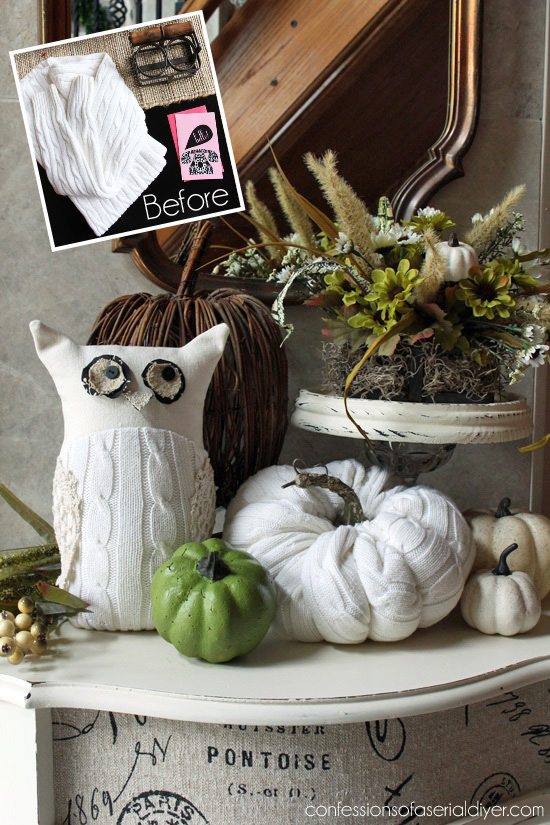 Guess who I got to send to this year? Shanna! She was pretty easy on me last year, so I tried not to be too hard on her.

Here’s what I sent her to makeover: 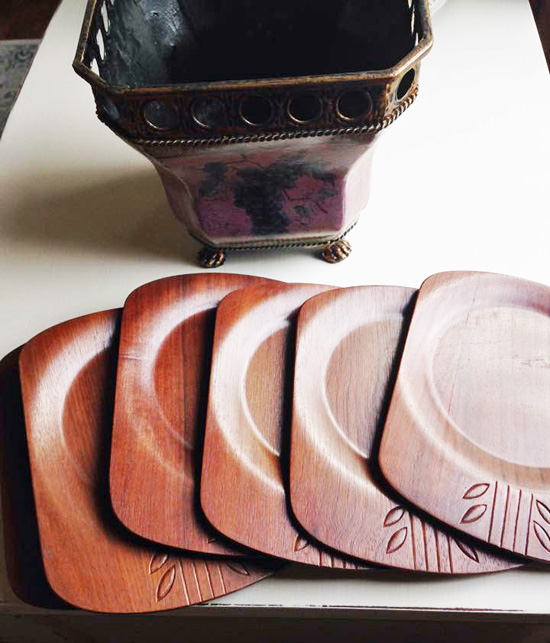 Check out what she did with it  here! 🙂

Want to see what I got from Shanna last round? 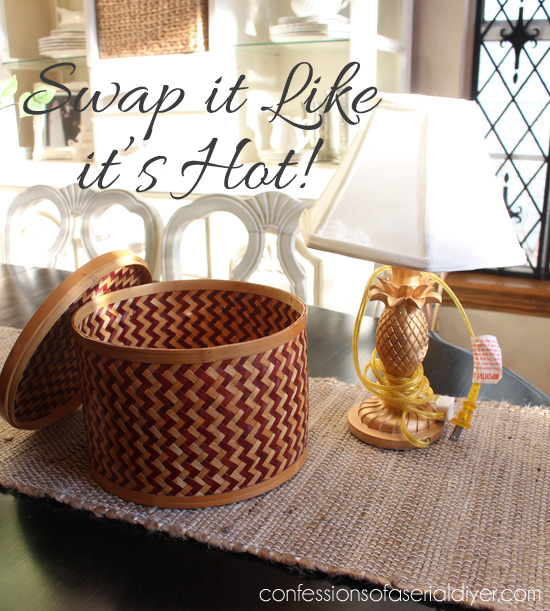 Um yeah…a little more difficult to make over, but I did it! See what I did with the lamp HERE, and check out the basket now HERE!

And here’s all the makeovers from this round from my fellow swap-it friends: 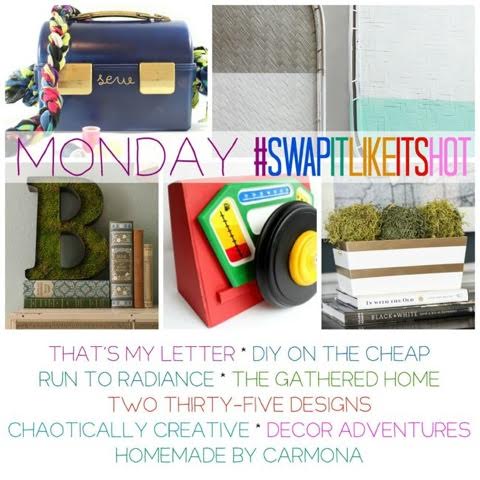 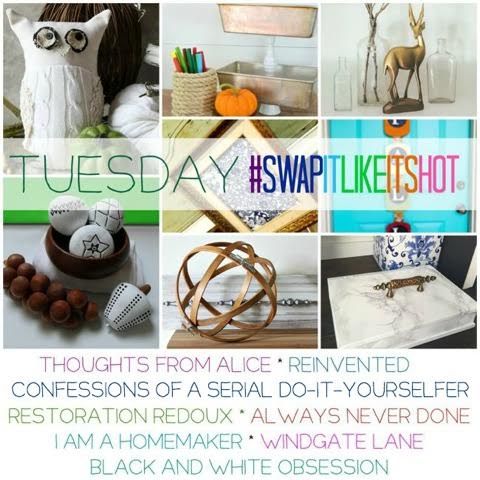 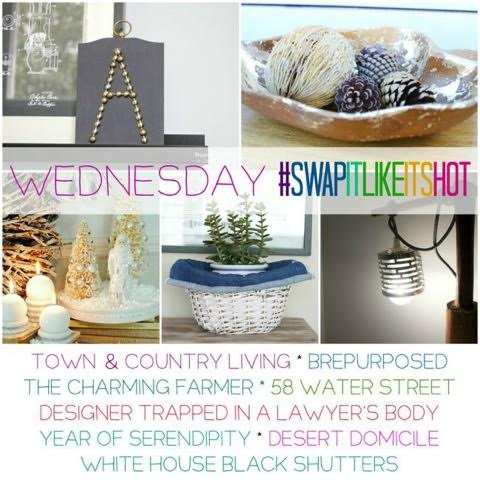 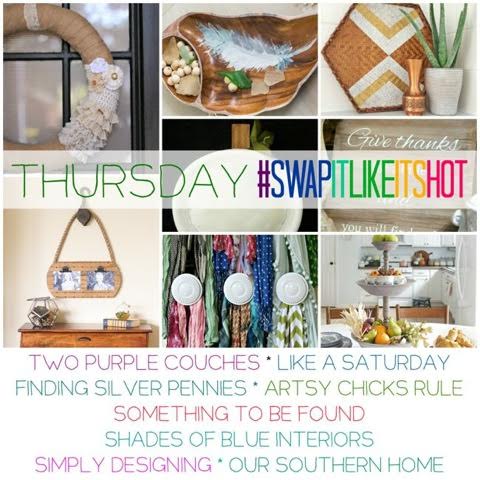 ONLY 12 HOURS LEFT!! Today is the last day to get

This sweet table has been sitting in our garage aw

Not too shabby for a $4 thrift store mirror, eh? P

This week I shared the easiest way to update a tra

I got to play with one of the brand new #dixiebell

Does this mirror look like a $6 thrift store find?

I just cannot pass up a good deal on a cute chair!

This mirror has been hanging around so long and ac