Hello sweet Friends!! I am excited today to share some of the progress we’ve made out back!

You may remember me mentioning that I still had the loveseat to my outdoor patio set when I shared the two side chairs that went with it in this post. I redid those for our side porch and was debating whether or not to redo the loveseat to go along with them out there. However the truth is, we rarely sit out on our side porch, so I hated to waste it out there when we really needed seating for our deck in the back. 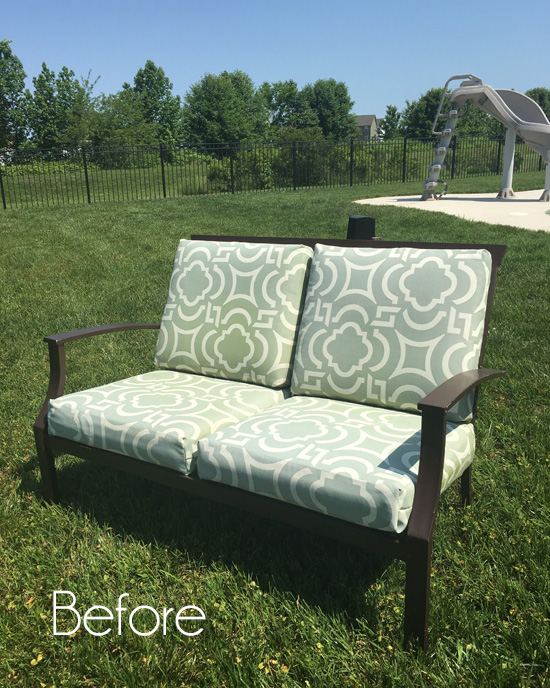 I also had four of these chairs from our old dining set: 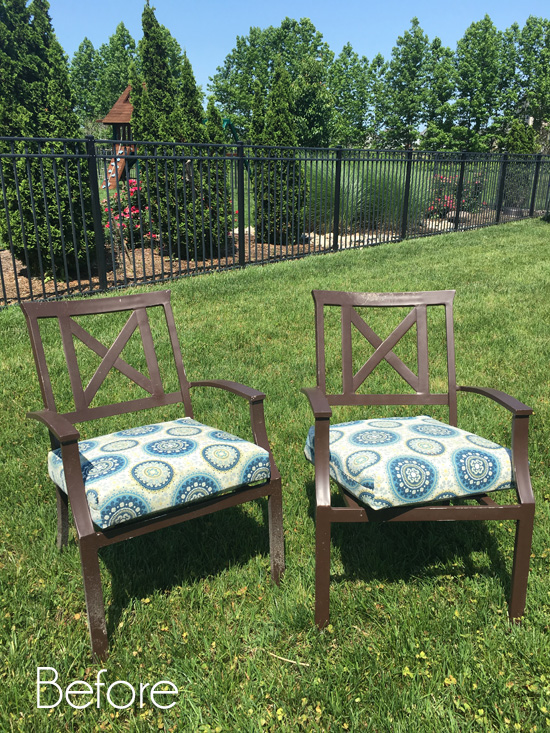 I broke down and bought a new dining set (That was SO hard for me!) when the table to this one kicked the bucket, and I was just going to put these chairs on the curb, but I just couldn’t bring myself to let them go. A couple of weeks later it occurred to me that I could use two of them down by the pool so I would have a place to sit and watch the kids swim.

I shared them with my DIY Rolling Umbrella Base last week: 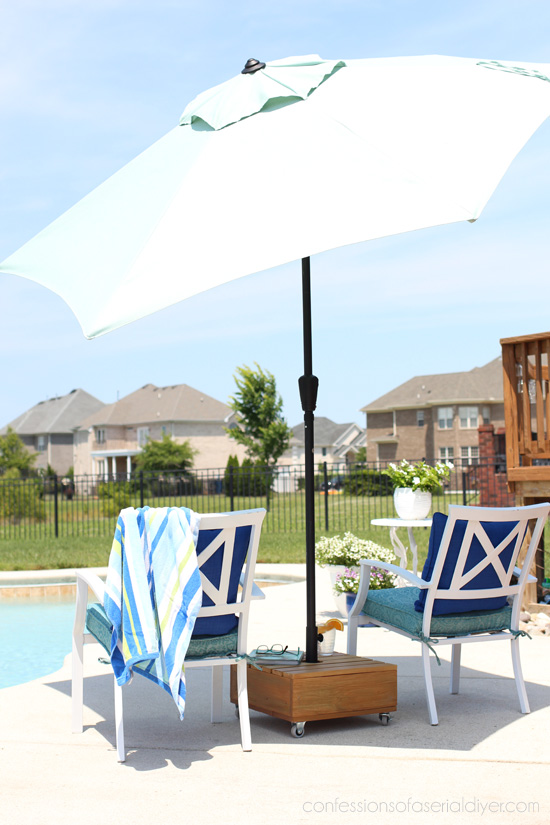 Yes those are the same chairs! I can’t tell you how happy I am that I did not put them on the curb!! I was super pleased with myself for this one!

THEN it occurred to me that I could pair the remaining two dining chairs with the loveseat to make a set for the deck!

And so I did just that. Here is how they came together: 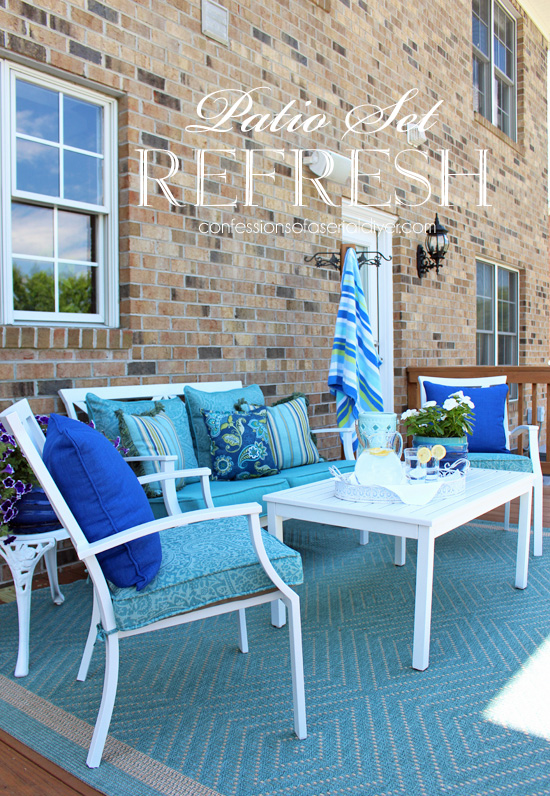 The side chairs that originally went with this loveseat (that ended up on the side porch) were much larger than these, but I think these work great! This is kind of a narrow deck space and I don’t think the larger chairs would have fit as well anyway. 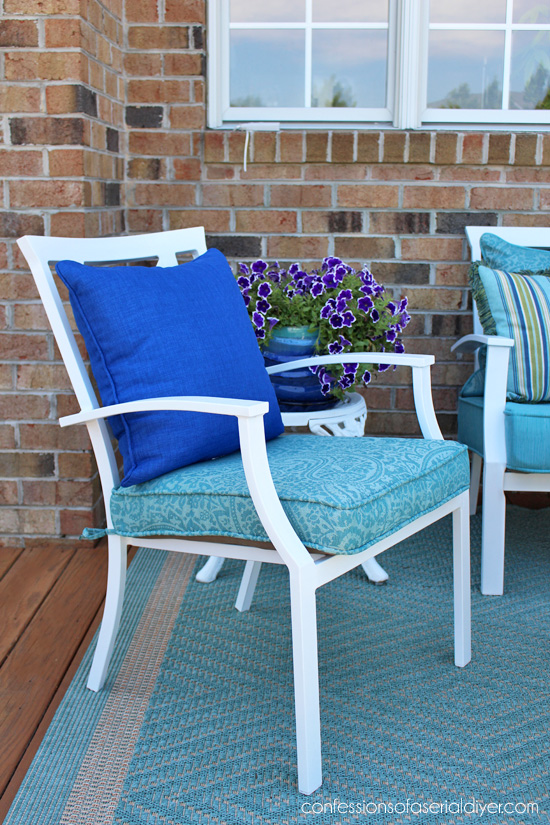 It is amazing what a can of spray paint can do! To update these pieces, I washed them down with my hose and a sponge first and let them dry in the sun. Then I gave each piece a coat of Rustoleum spray primer to help cover the dark brown more easily.

I followed with a couple of coats of my favorite spray paint, also by Rustoleum: 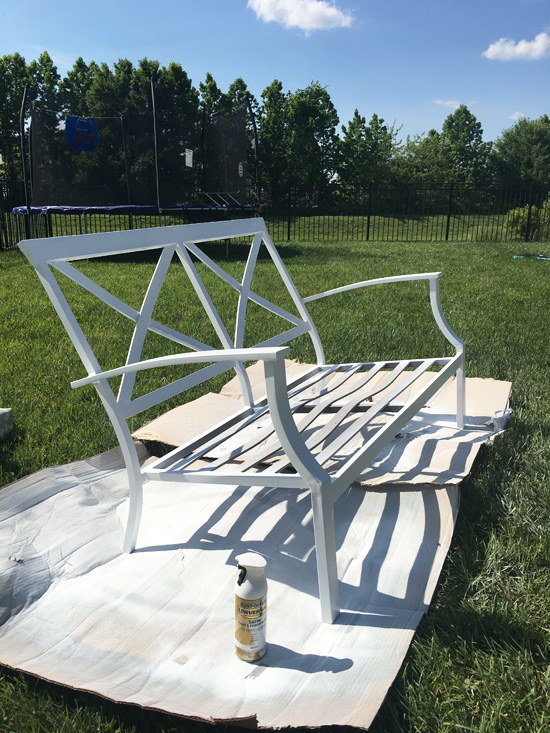 I was pleasantly surprised how fantastic they looked!

I had planned to sew new covers for the existing cushions like I always do using my Sew Easy Outdoor Cushion Cover Tutorial, but I just could not find a fabric that I wanted to use.

I had already purchased this pretty rug from Target: 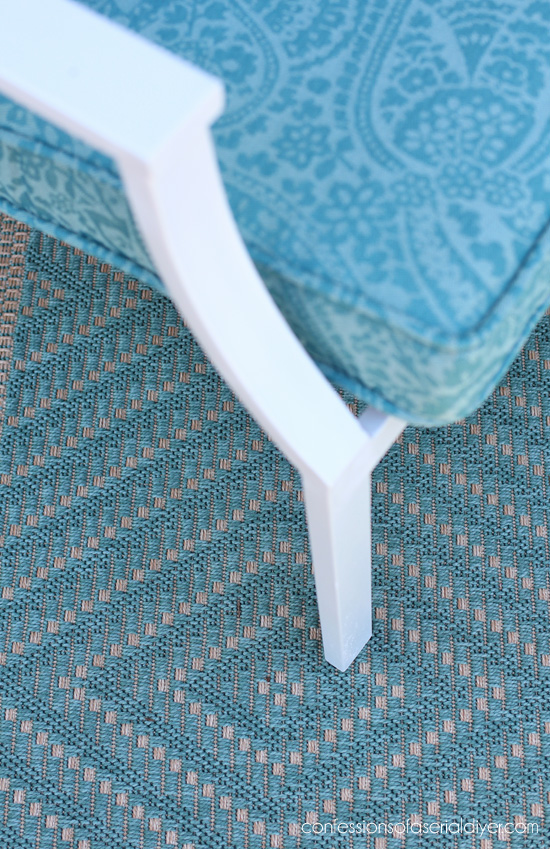 So I was trying to find something that would work with it and that was a bit of a challenge. Then I stopped in at Lowe’s one day and saw these cushions that were just perfect: 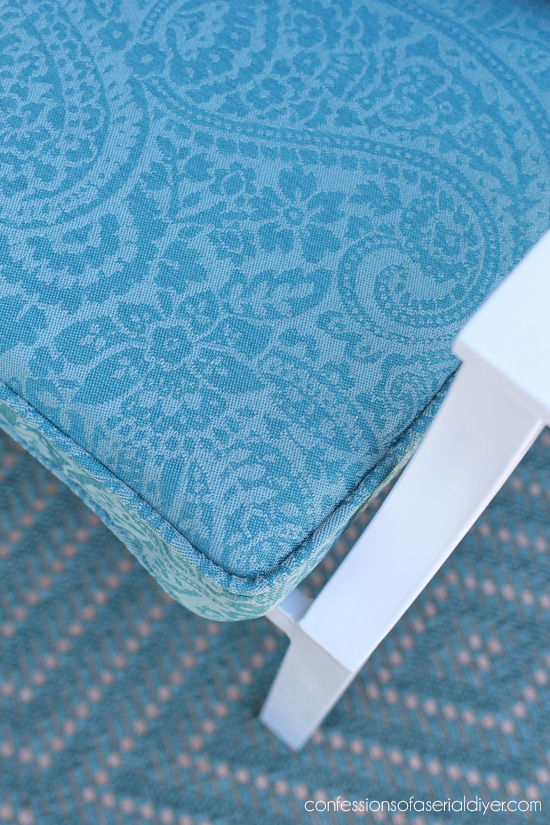 The loveseat cushions came in sets that included the seat cushion and back cushion for $59. The chair cushions were around $30, so definitely not as cheap as recovering the old cushions, but I figured I saved on the furniture by once again updating what I already had, so I could splurge a bit on the cushions! Plus I decided I deserved the break. 🙂 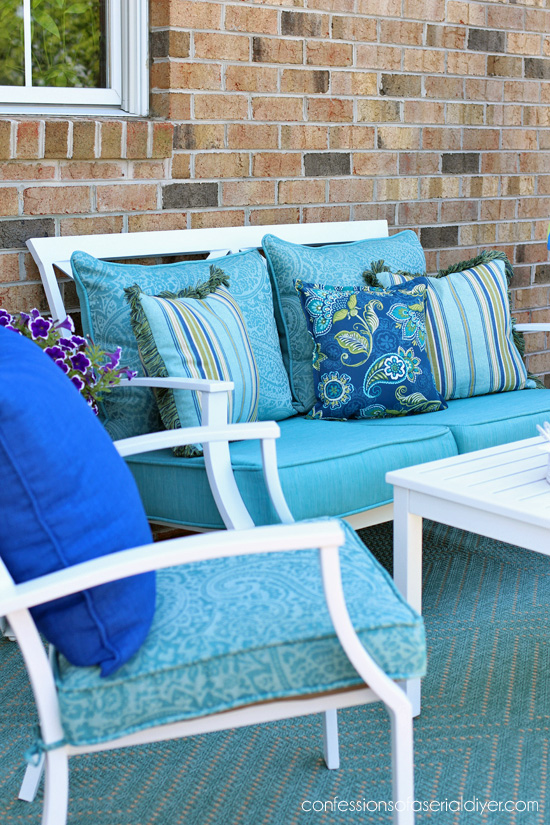 I like things pretty neutral inside for the most part, but I love using color outdoors! I found these fringed cushions at Pier One and the little blue cushion was one I had left from last season… 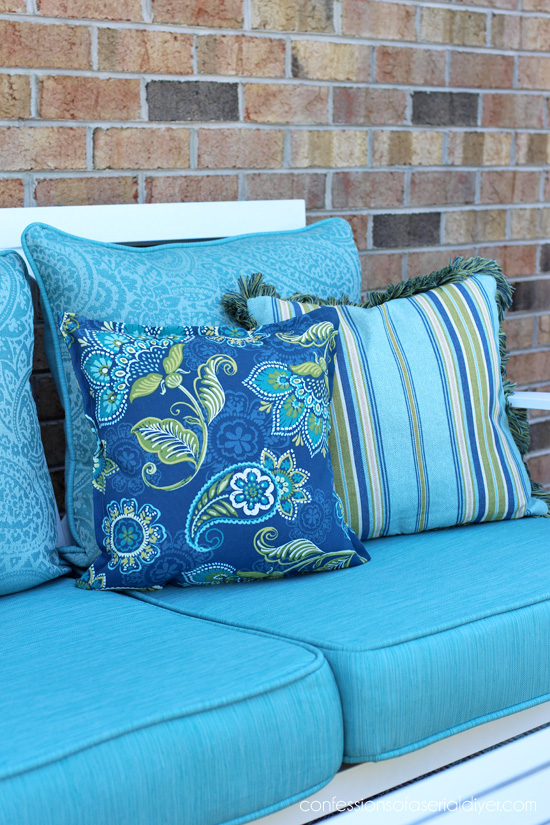 I pulled the royal blue from the pillow fabric and found these larger solid pillows for the chairs at HomeGoods: 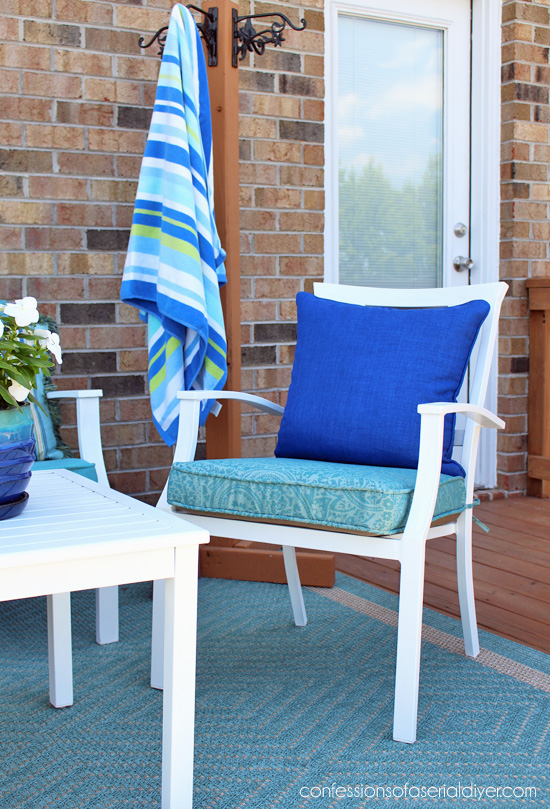 This spot is nice and shady until the afternoon, which is a bit of a challenge to photograph, but makes for the perfect spot to sit in the mornings. 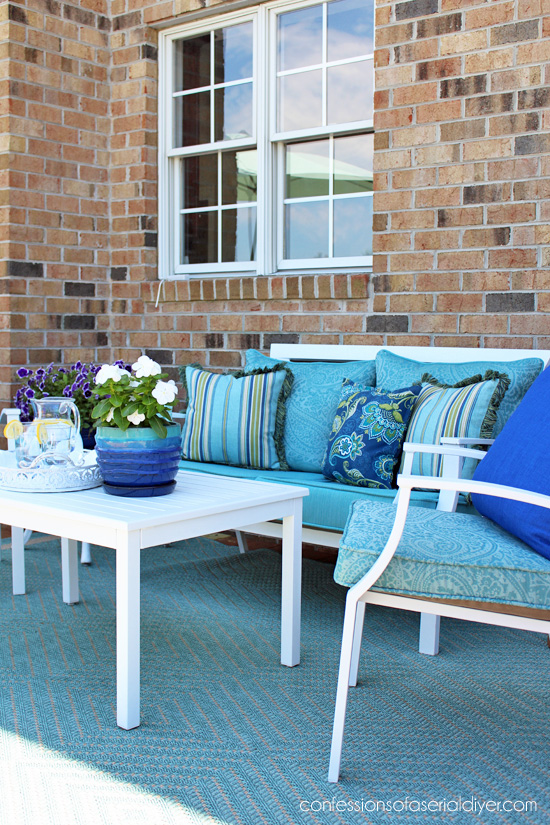 And the coffee table was able to be saved as well. It was a hot mess… 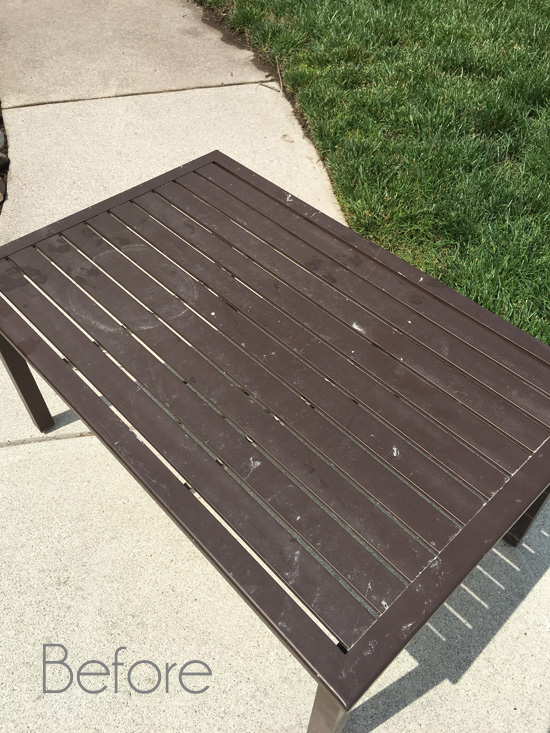 The magic of paint! 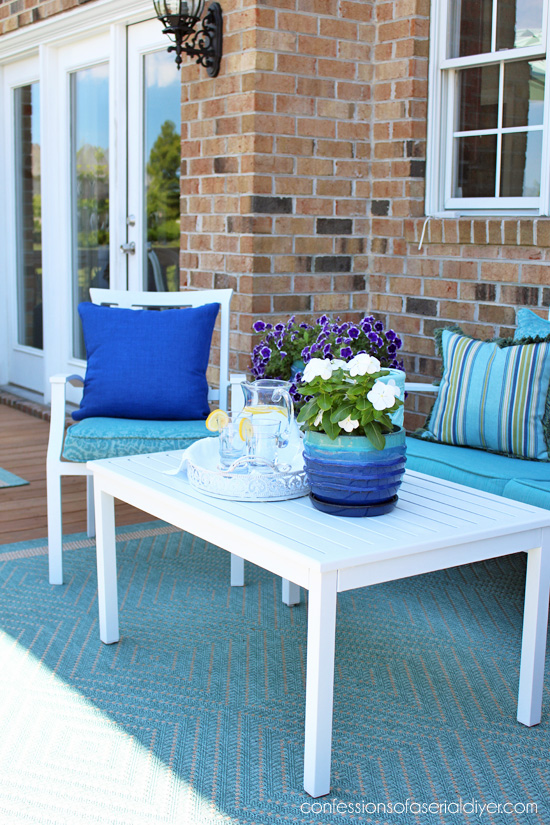 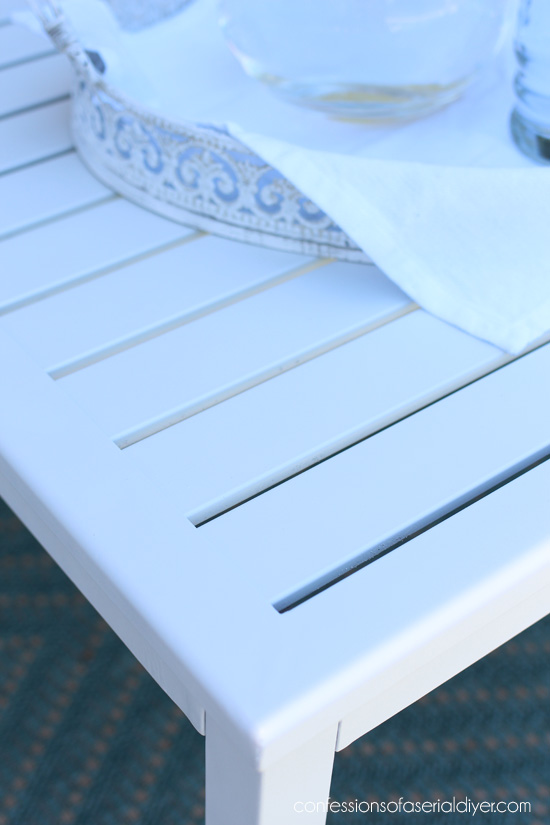 This set has come full circle. It was white when I bought it. I wasn’t sure how it would do going back to white from dark brown, but it did great! 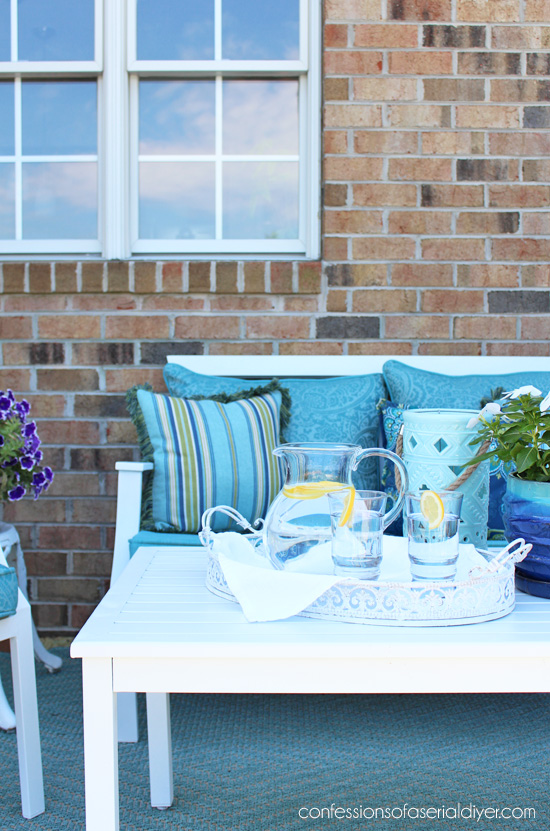 I didn’t  mention that I also pressure washed and restained the deck, but here is what it looked like a couple of months ago: 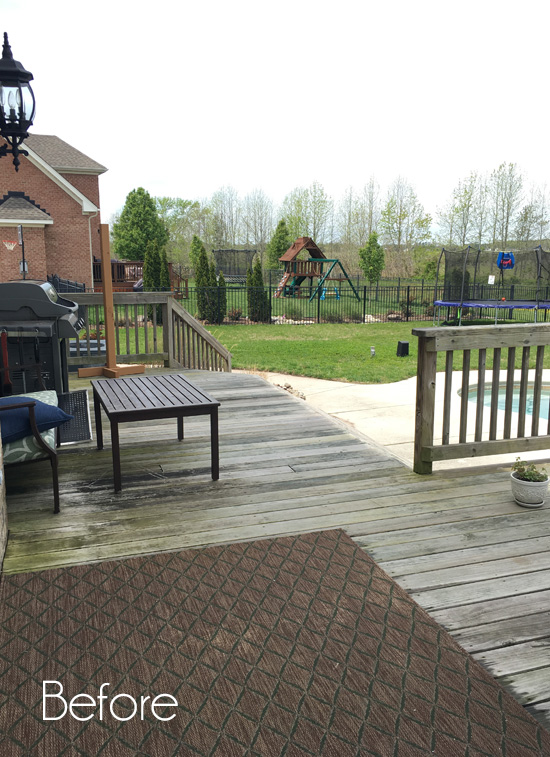 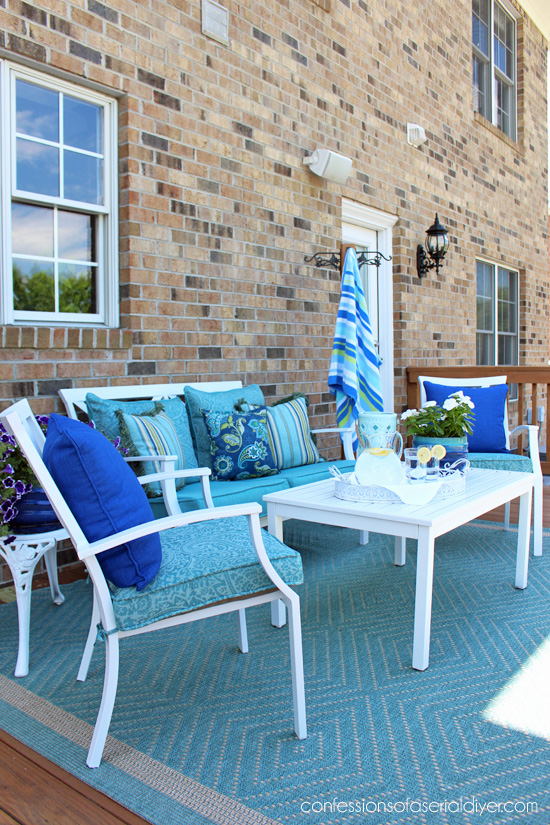 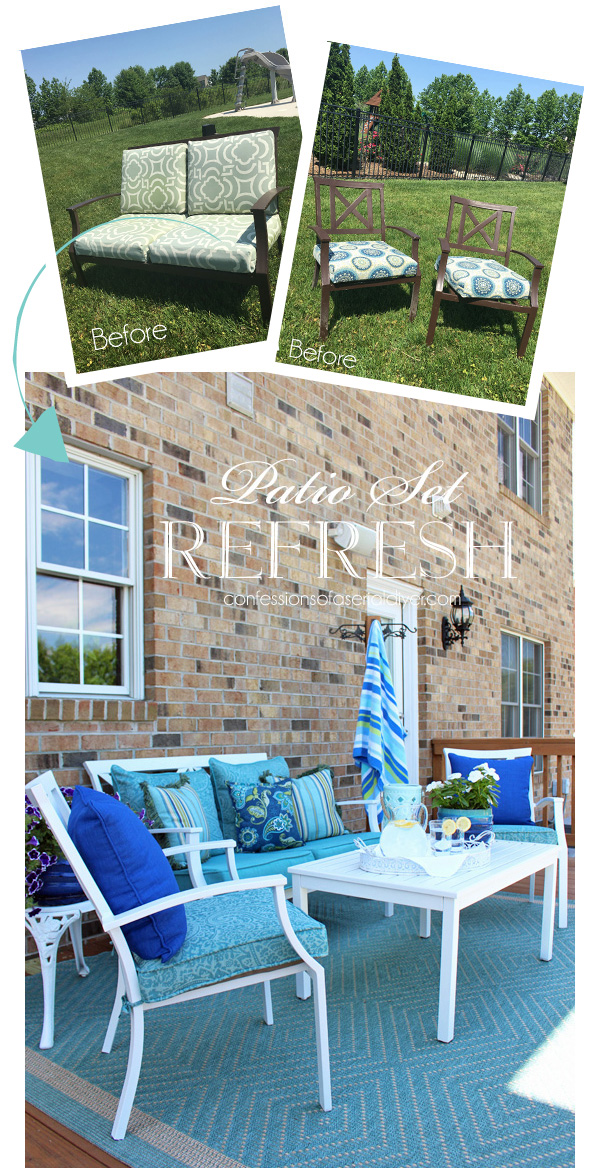 I’ll be back tomorrow instead of Thursday this week. I’m sure ya’ll won’t mind me showing up a day early. 🙂

Once again I’ll be joining in the Seasonal Simplicity Summer Series hosted by my sweet friend Krista from The Happy Housie. We are sharing outdoor spaces, so I’ll be back sharing the rest of our deck, and my new dining set!

Here is what that space looked like a couple of months ago: 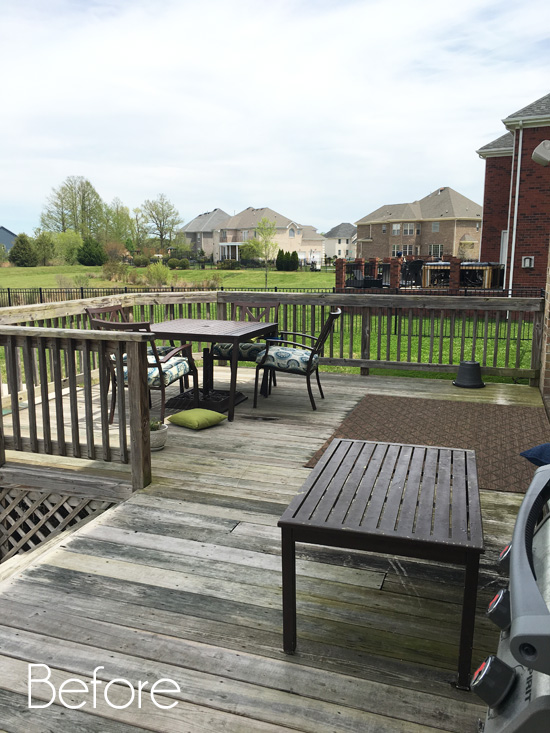 I just shared the more narrow space in the foreground. The coffee table is in about the same place for reference.

UPDATE: No need to come back, see what this side of our deck looks like now HERE! 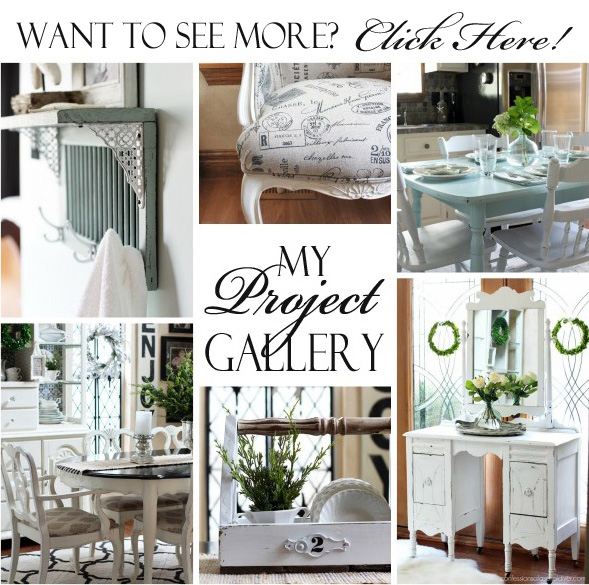 Not too shabby for a $4 thrift store mirror, eh? P

This week I shared the easiest way to update a tra

I got to play with one of the brand new #dixiebell

Does this mirror look like a $6 thrift store find?

I just cannot pass up a good deal on a cute chair!

This mirror has been hanging around so long and ac

This sweet chair was a steal at the thrift store f

Does a magazine rack have to hold magazines? Of co