Hello sweet friends! Thank you for sharing in my excitement Tuesday about the completion of our very first room in our new house: our guest bathroom! It really feels like a win to have one room done….one down, many more to go!  Many also responded about being interested in a wainscoting tutorial, so I will gladly share that with you next week on Thursday!

In other news, my sons had their first day at their new schools on Tuesday and would you believe that not just one, but BOTH of them got off at the wrong bus stops?? We never thought about that being an issue ha ha! My oldest had to use his GPS on his phone to make his way home. Luckily they were both in the right neighborhood, not too far away! Yesterday went much more smoothly!

As you may know I have been on the hunt for two chairs to complete this set in my kitchen that I shared not too long ago: 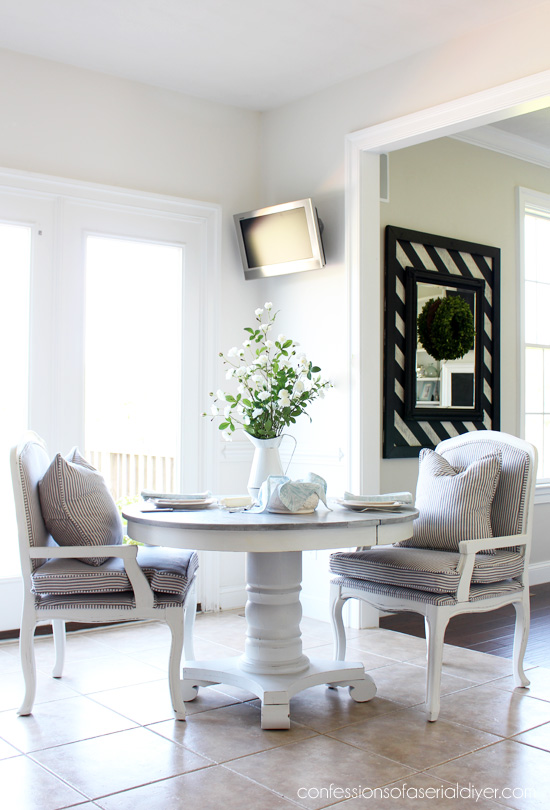 You can see the table makeover I shared recently HERE and the chairs makeover I did in the Spring HERE if you missed them.

This set is working out perfectly in our new kitchen, but I needed two more chairs. The problem I was running into in my search, was finding just two that matched. There were lots of sets of six though!

Then when I was wandering through HomeGoods last week I spied these: 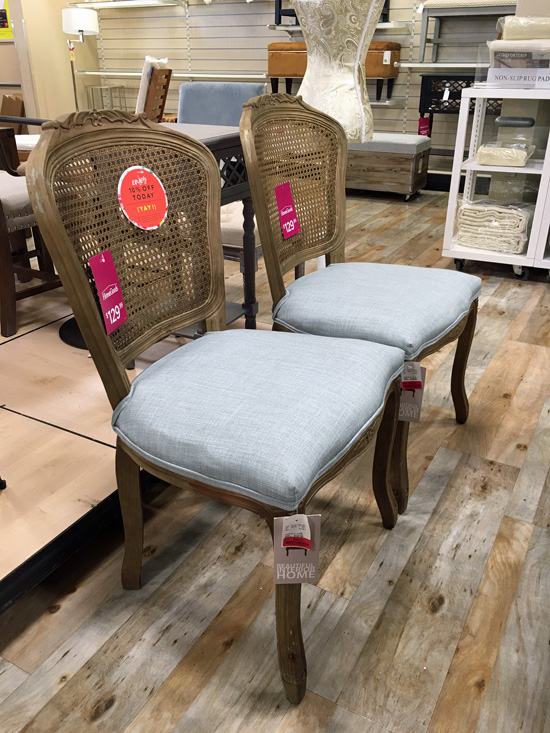 I had actually seen them once before but was sure I would be able to find something at one of my favorite thrift stores for much cheaper. When I saw them again, they had been marked down to $95. That’s way more than I hoped to spend, but a great deal for a brand new chair, and they had just two, so in the cart they went! 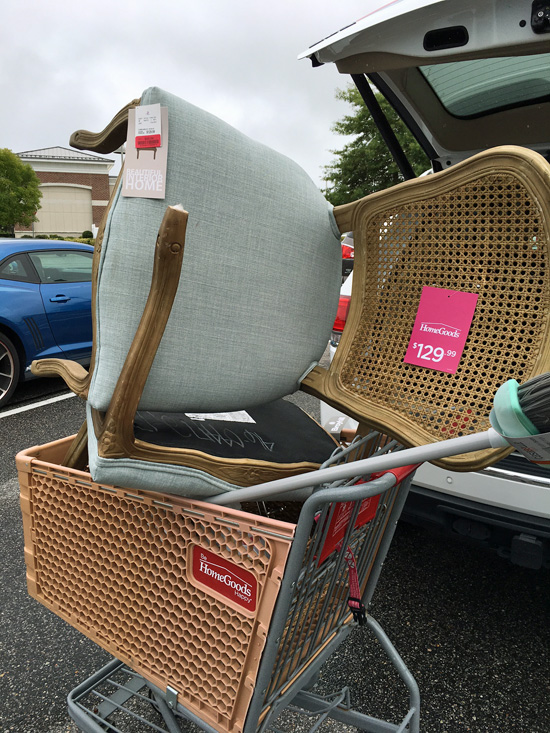 Although these were brand new, I didn’t have any hesitation about taking a paint brush to them…they were gold, y’all. Really gold.

Making them match the others I already had was actually pretty simple. All that needed to be removed was the piping around the bottom of the cushion and then I could get straight to painting. (That piping didn’t even have any cording in it…it was all flat??) 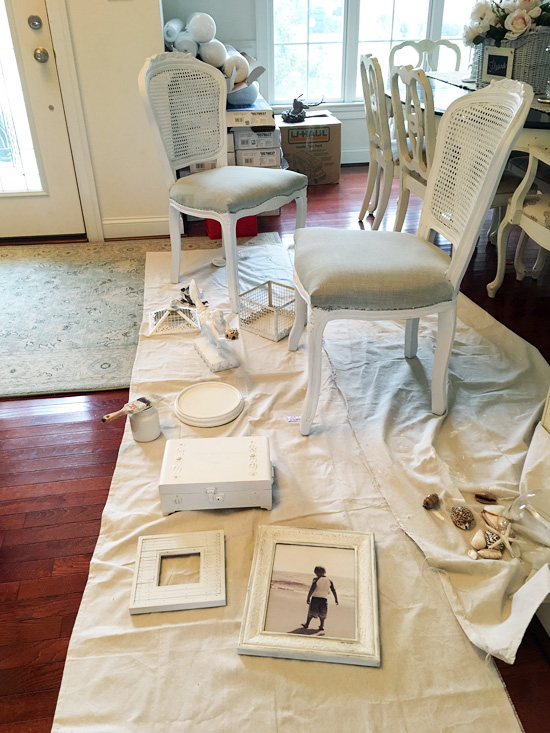 First I spray primed both chairs, then I painted them with (affiliate link)  Fusion Mineral Paint in Casement to match the table. I like this paint because it requires no top coat, but since there is no sanding after, the finish isn’t quite as smooth to the touch as a chalk paint and wax combination, but I figured that would be just fine for these chairs. You can see I also grabbed several small things from my built-ins that were originally more ivory, to give them a fresh update as well.

I don’t usually paint in the house, but it was SO incredibly humid outside and  I was trying to get them finished before our cookout we had last weekend. 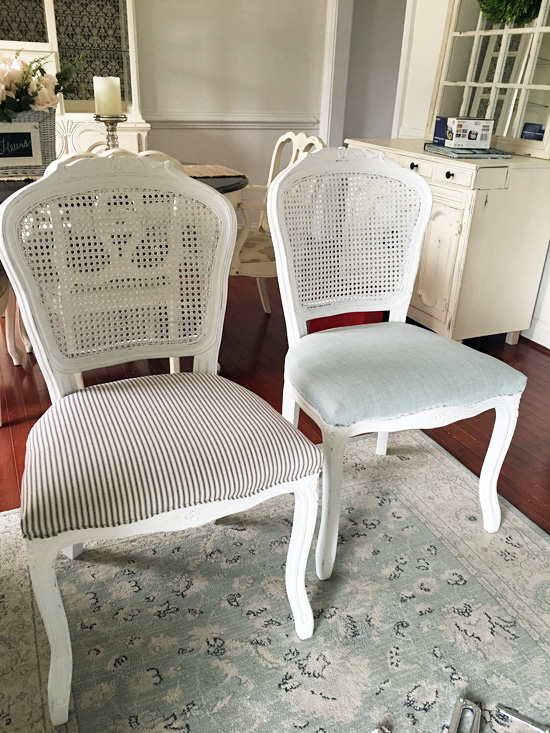 See my tutorial HERE to see how I recovered these chairs and made the piping. I actually really liked the original fabric with the white, though!

I am so pleased with how this set came together: 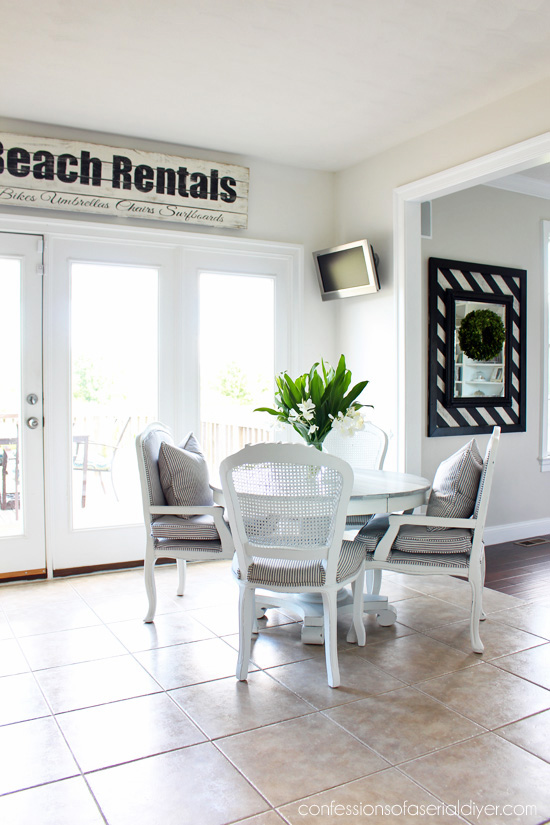 Thanks to my sweet MIL for bringing me these beautiful fragrant blooms from her garden…just in time for these photos! 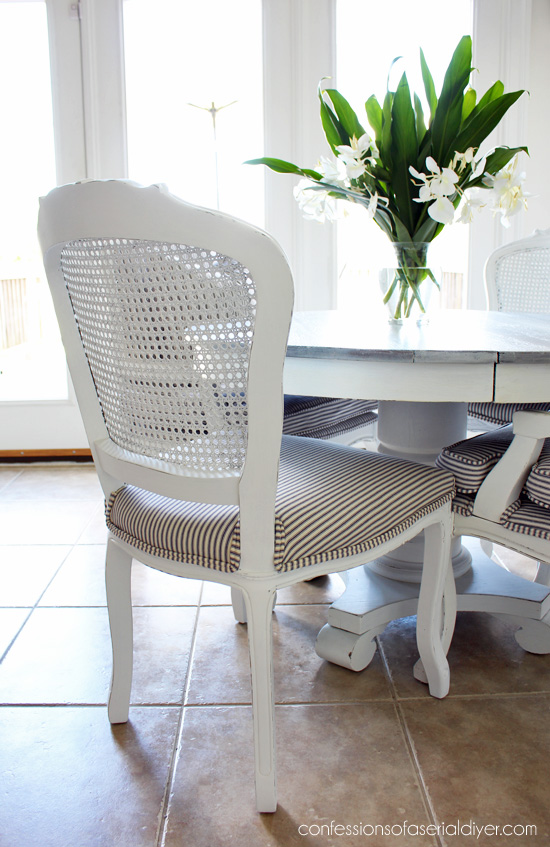 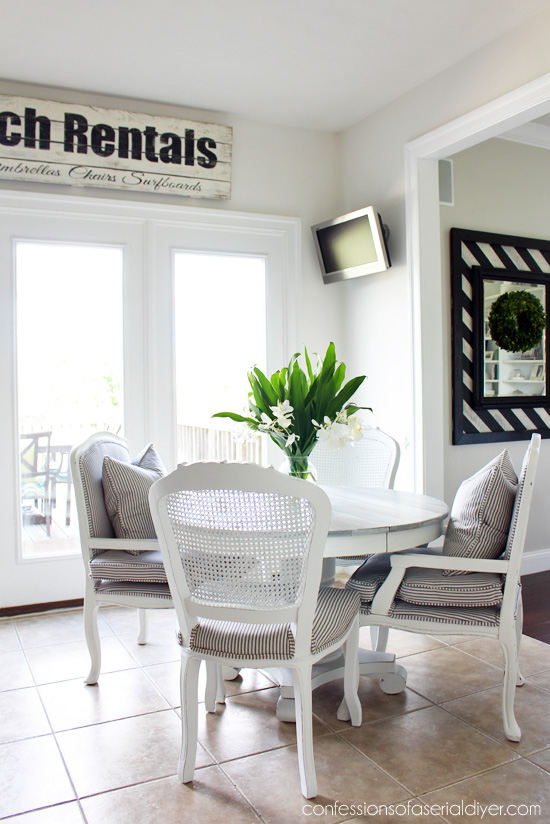 I liked these chairs because they have similar lines to the other two: 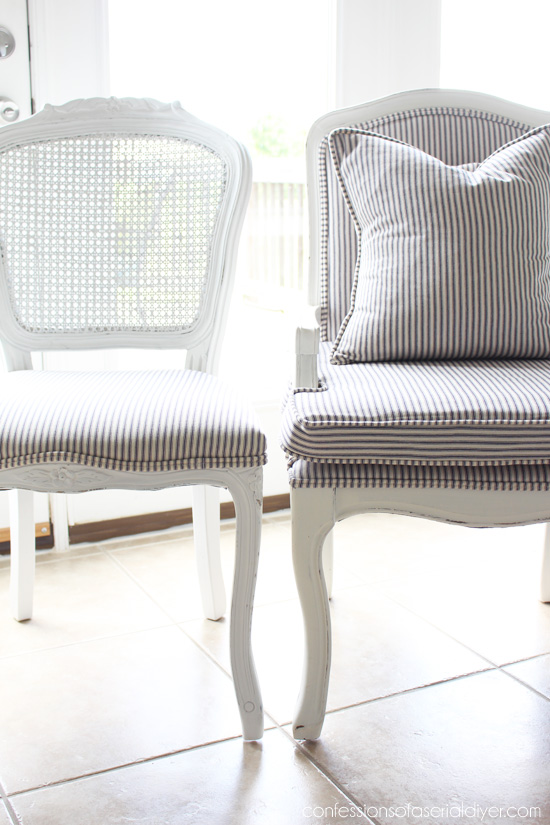 I thought they would make a pretty set. I love the carved details on these ones… 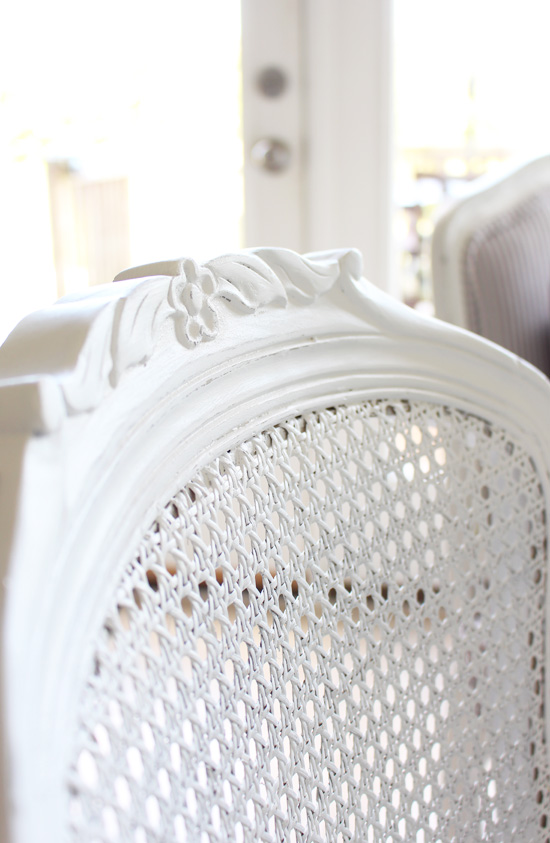 The piping is super easy to make, I promise! If you can sew a straight line you can totally make this… 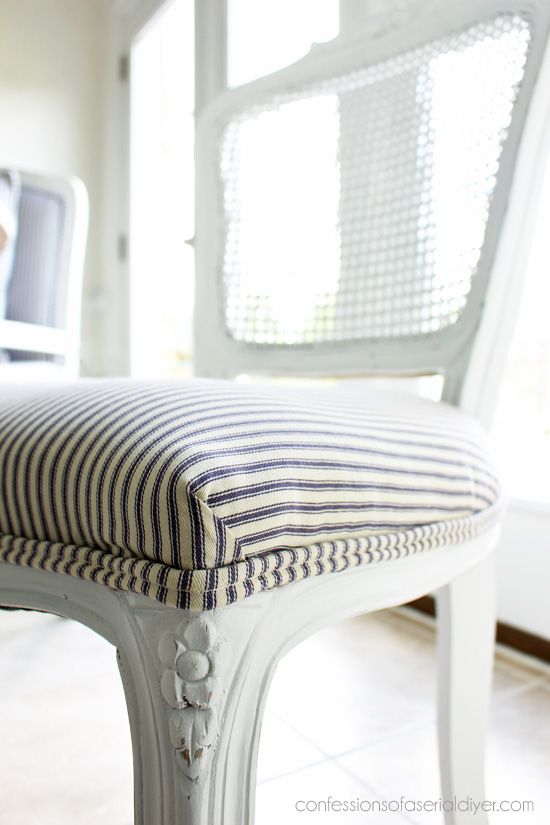 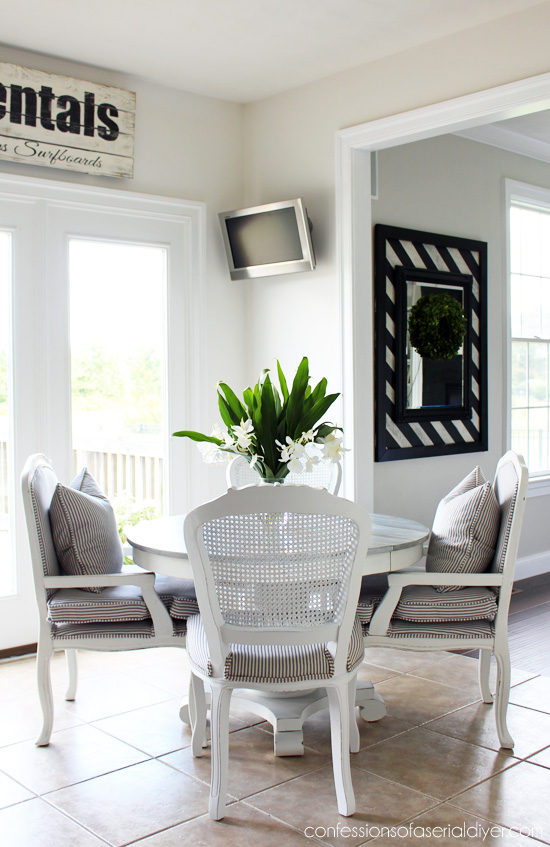 I decided to hang my “Beach Rentals” sign here above the doors. I think it works perfectly! 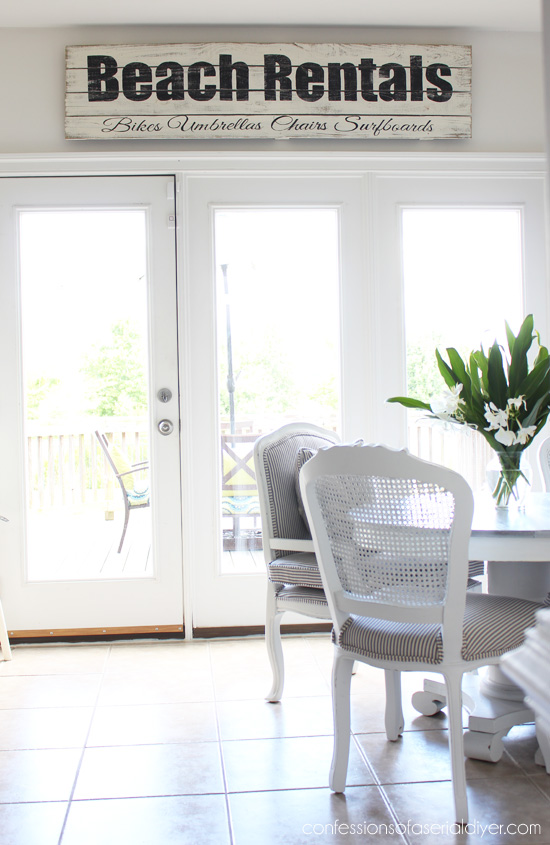 See how I made that sign from an old fence panel HERE. I still need to paint in here, but I’ll just take it down before I do. 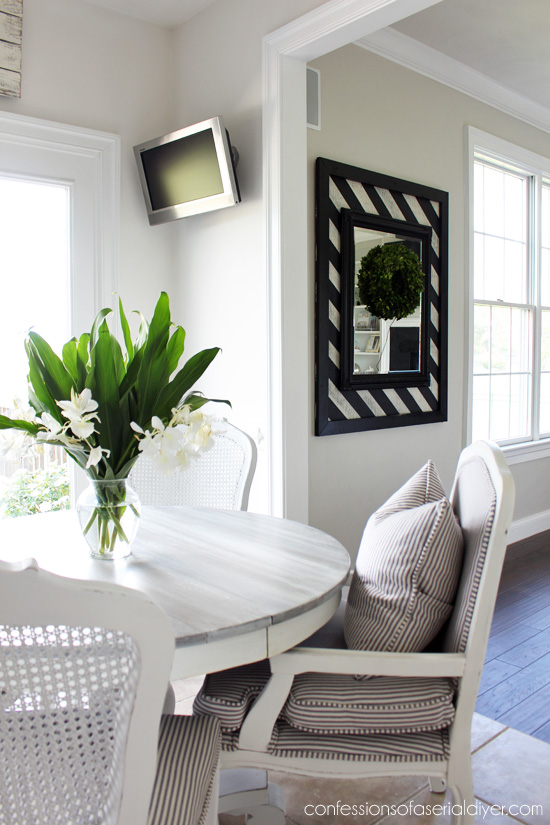 That was a DIY project that was the result of a big fat fail! See that HERE. And don’t mind the little TV in the corner…that will be going soon.

I have been playing with the built-ins a bit. It’s harder to style them than I thought it would be: 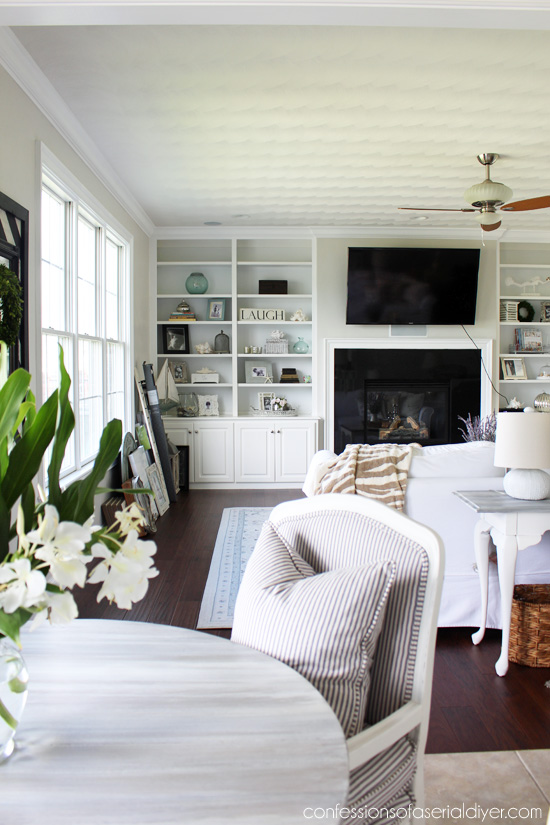 Everything on them is something I already had.  My hubby still needs to hide that cable cord from the TV and I need to figure out a plan for this window: 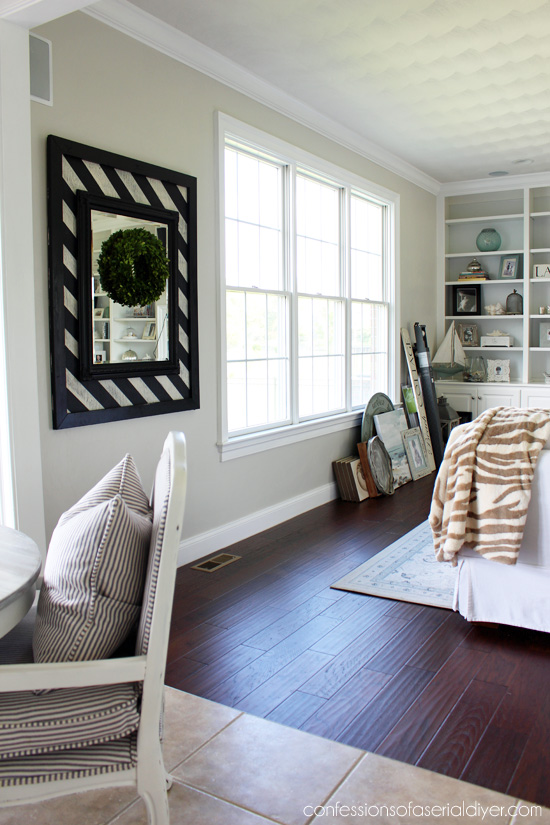 It is super tall so I am undecided if I want curtain panels (and if so, on just the outsides or in between each window as well??), roman shades, or should I just leave them as is? I’d love to hear what y’all think! 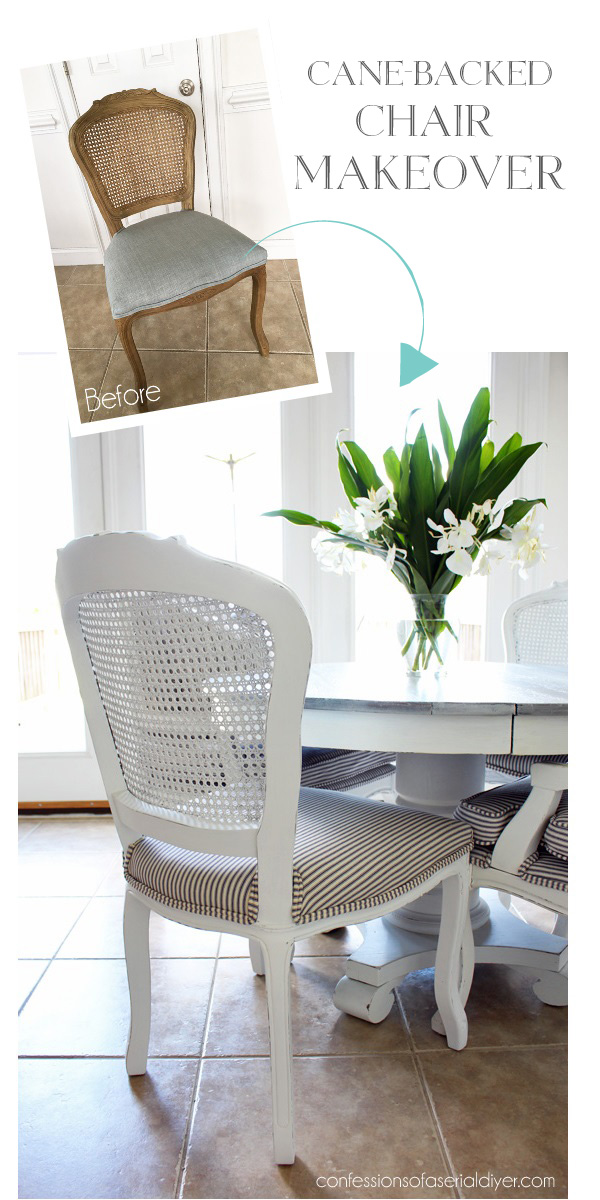 You will probably never ever see me redo a brand new piece of furniture again! I really hated paying $200 for two chairs I was going to have to redo, but in the end they worked out great.

I’ll be back on Tuesday with my Trash-to-Treasure girls sharing a new thrifty makeover! 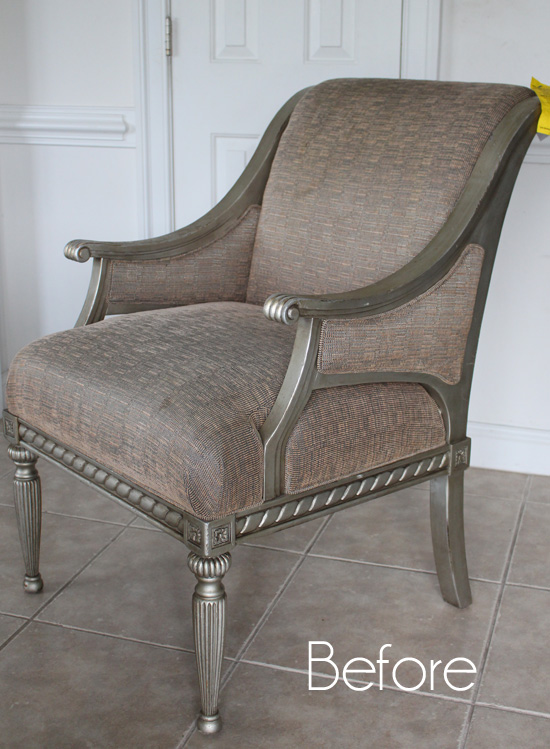 UPDATE: Check out what I did with this chair HERE now! 🙂

If you missed any of my new house adventures so far, you can catch up here:

We Got the House!

Have a great weekend!!