Happy Thursday, Friends! Today I’m sharing another favorite from the archives. I spied this antique cabinet at the thrift store near my house last year. It was $79 and probably totally worth that, but the door was missing the glass and didn’t close real smoothly so I passed. I went back a week later and it was marked to $49!

I just couldn’t pass it up the second time: 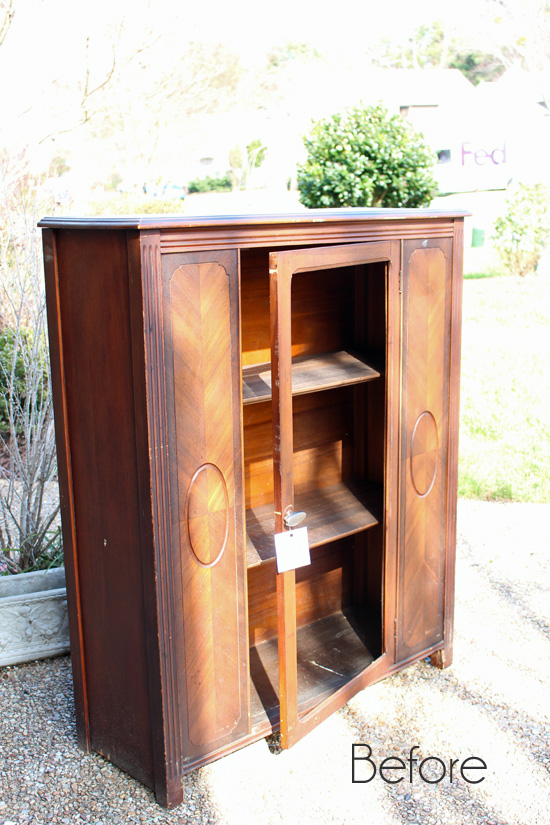 It doesn’t actually look too bad in this photo but it wasn’t great in person. I’m not exactly sure what was built up on that corner there, but there were a few places like that… 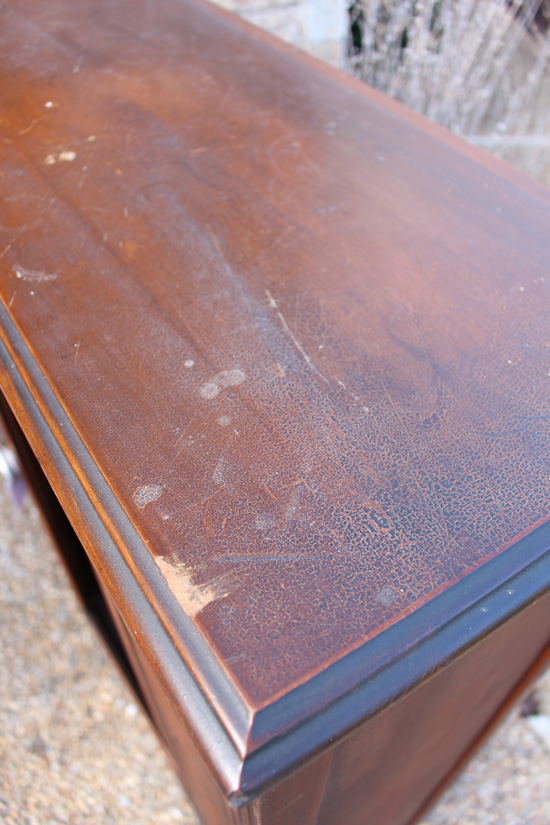 I opted to go with a simple white makeover: 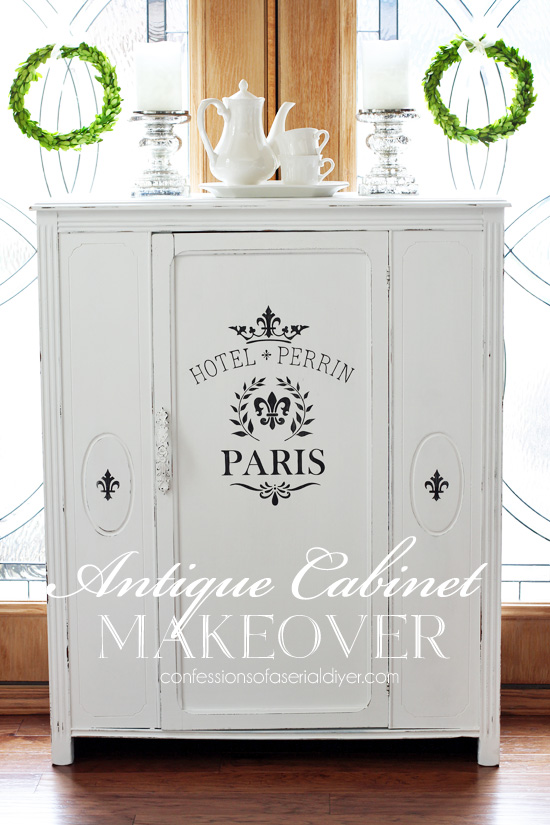 I knew I wanted to add a panel to the door instead of replacing the glass so it could provide closed storage. (Cheaper too!) 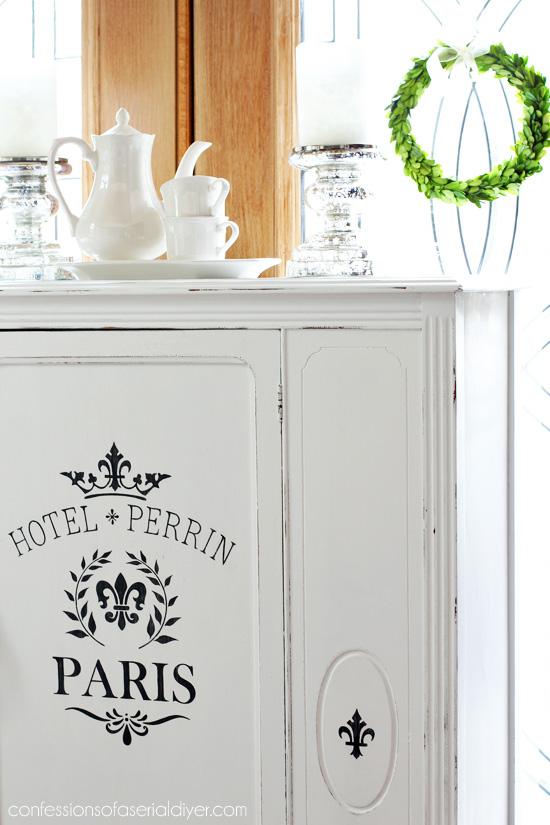 The door panel is hardboard. It’s like pegboard but without the holes and I find it at Lowes or the Home Depot. (This is the same thing I use to make chalkboards.) It is super smooth and paints up beautifully. I’ve included affiliate links in this post for your convenience.

. (Seriously one of my favorite tools in my toolbox!) 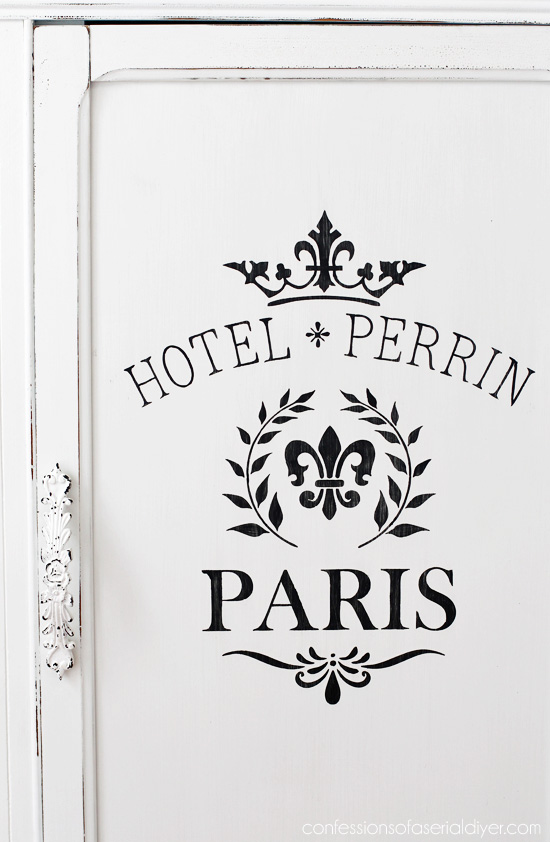 This piece gave me quite a bit of trouble though. I was almost out of my tried and true Bulls Eye Clear Shellac, so I was headed to the store to pick up some more since I knew this older piece would likely be a bleeder. It was unseasonably cold for our area when I was painting it, so I was reading the recommended minimum temps to be used in when I saw on the label that they had another product they suggested for painted pieces. It was their shellac-based white primer. Perfect!

I could have kissed that wax! It might have just been this particular piece and whatever that gunk was that had accumulated on the surface, but next time I’m going straight for my regular ole clear shellac! 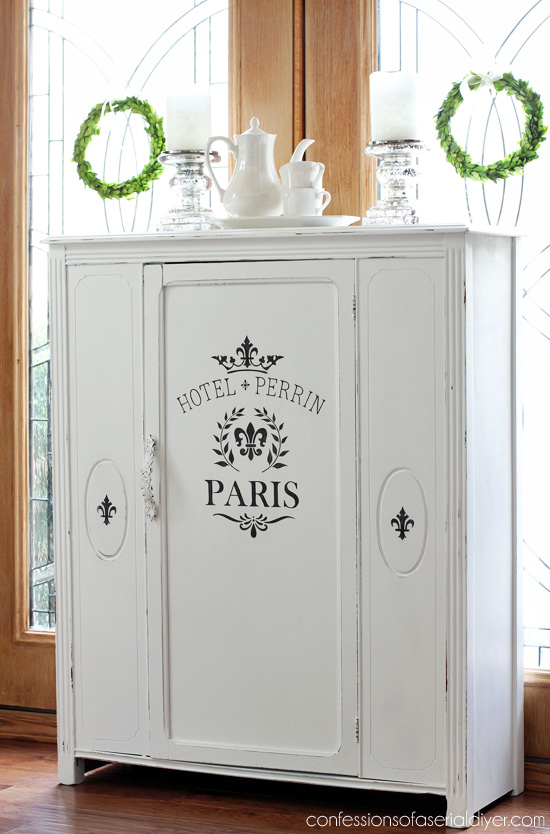 I used a mix of two stencils for the door. This one and this one. 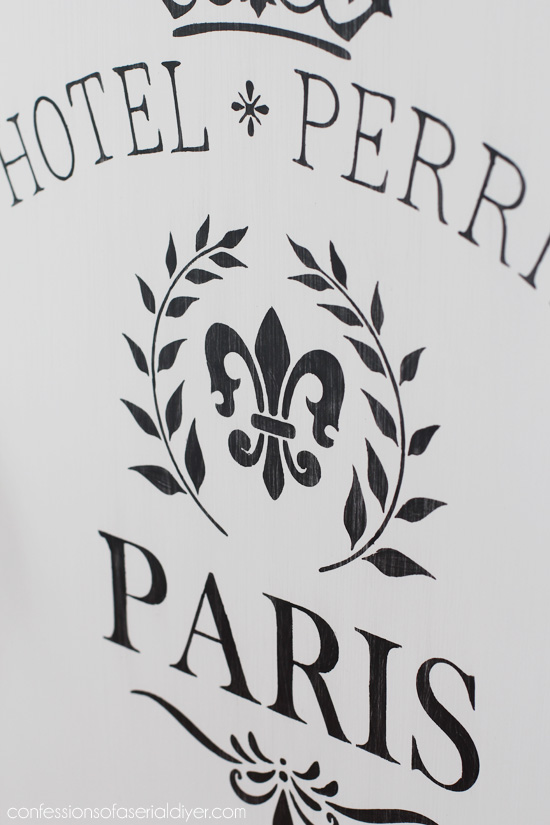 Stencils are the easiest way to achieve this look for the least amount of effort. I used spray adhesive

to temporarily adhere my stencil to the surface of my project. (Spray the stencil, not the project surface.) It should not stick permanently or leave any sticky residue. Then I used the smallest brush from this 3-piece nylon brush set

to fill in the stencil using acrylic paint

, brushing away from the edges. 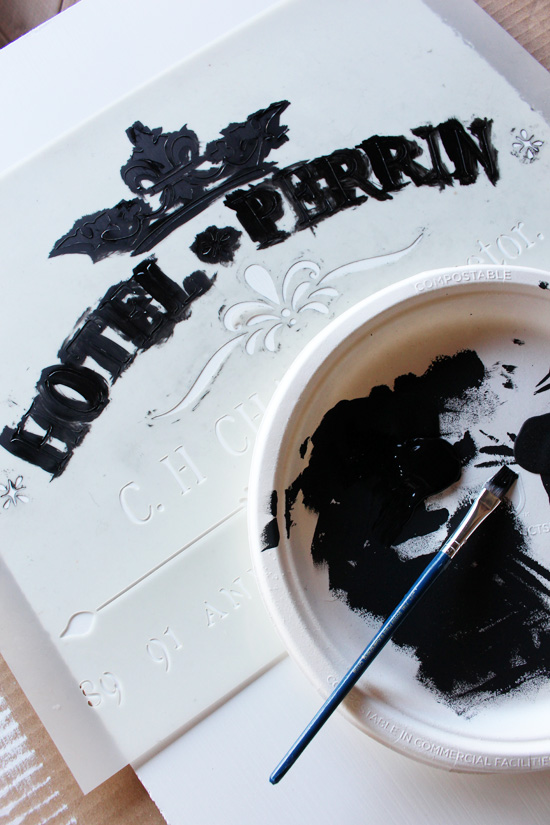 After I removed the stencil, I had a couple of areas to fix here and there which I used a script liner brush

for. This time it came out really well thank goodness! I also filled in all the gaps in the lettering that gives it away as a stencil using the same brush. (Rinse your stencil right away with warm water. Allow the sticky back to air dry.) 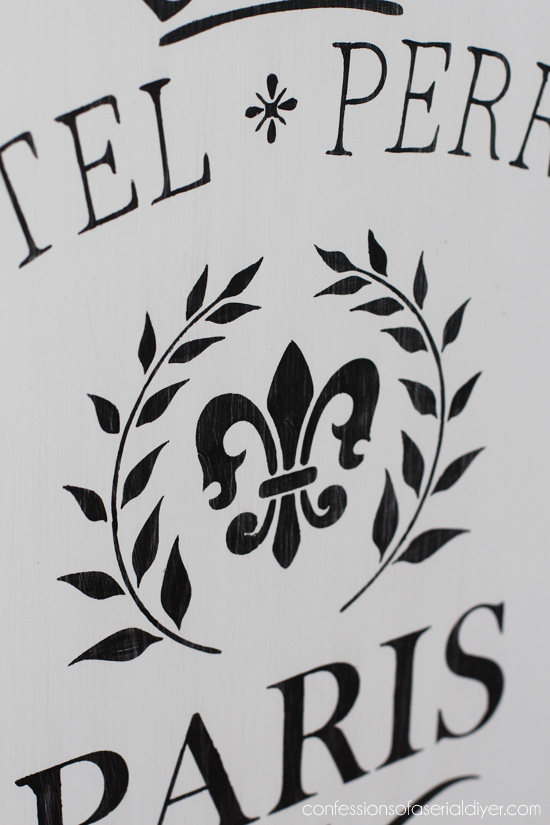 After allowing the paint to dry to completely, I sanded using 220 grit sand paper and sealed with Annie Sloans’s clear soft wax. 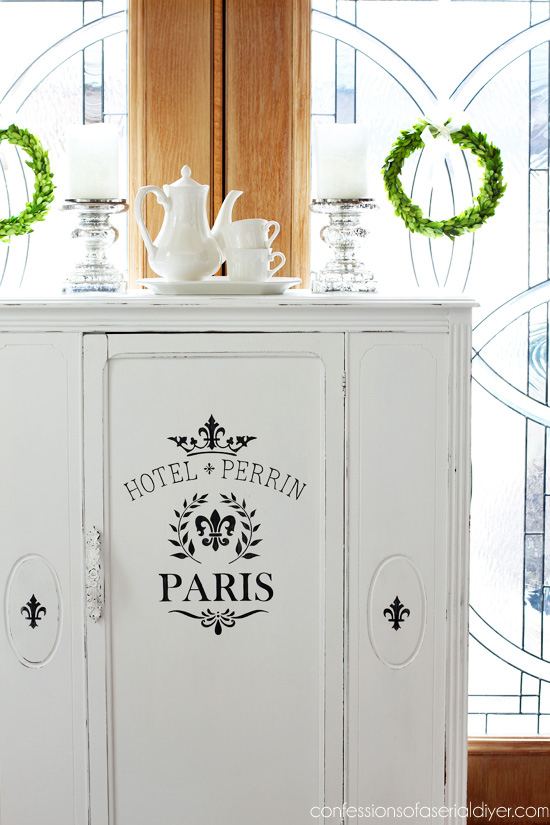 Does the handle look familiar? It’s just like the ones I used on the dresser I reshared on Tuesday, from Hobby Lobby. 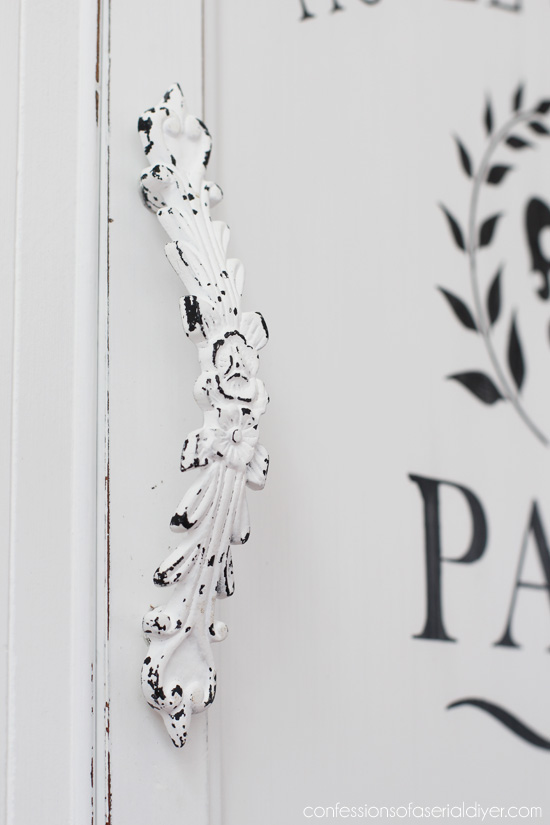 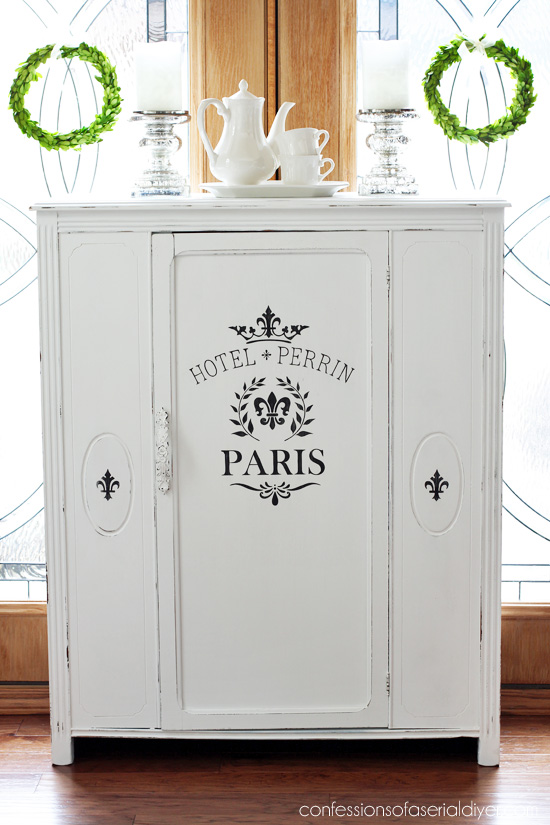 And for the inside…

Ooh la la. I decided instead of just painting the ugly brown hardboard on the back of the cabinet door white, I would cover it in fabric instead. This also covered the points (from the point driver) that are holding the panel in place. I had this in my fabric stash… 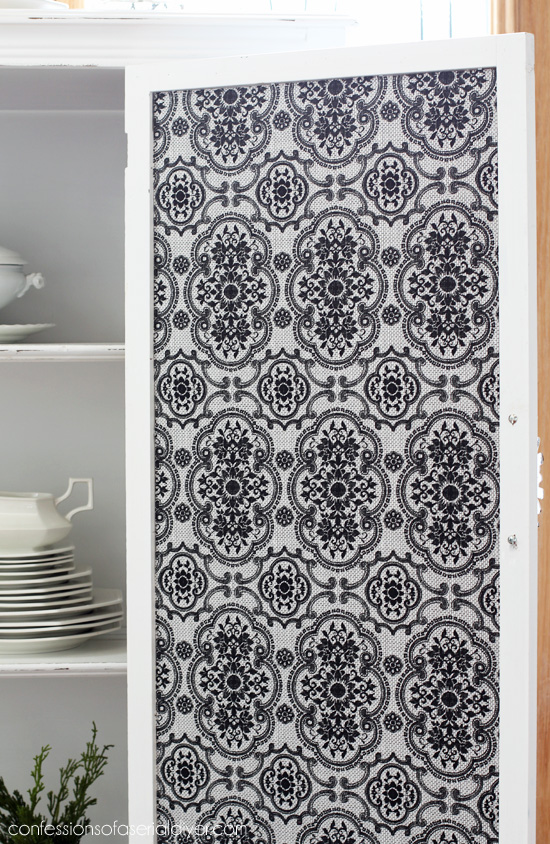 I adhered it with matte Mod Podge, brushing it on like a glue, and added the fabric over top. To make it easier to cut the fabric straight for panels like this, I always use my rotary cutting set

I kept the rest of the inside a simple white. My thrifted ironstone looks so pretty in it… 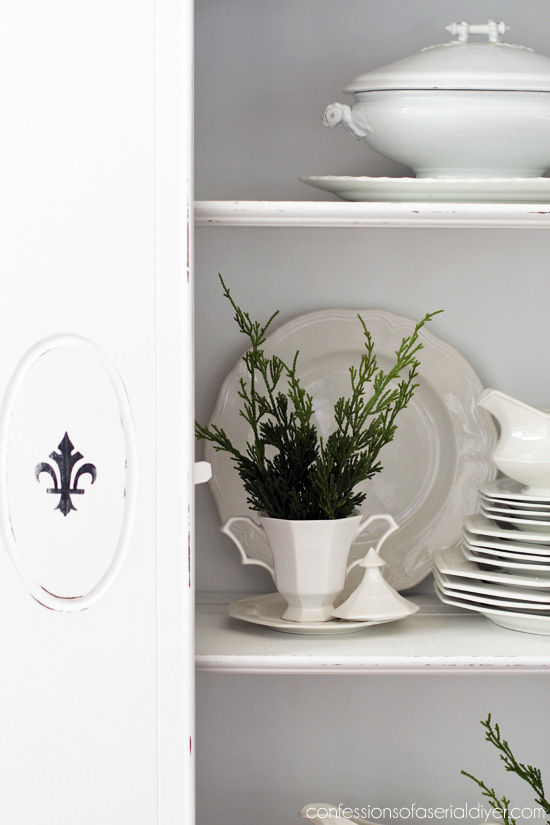 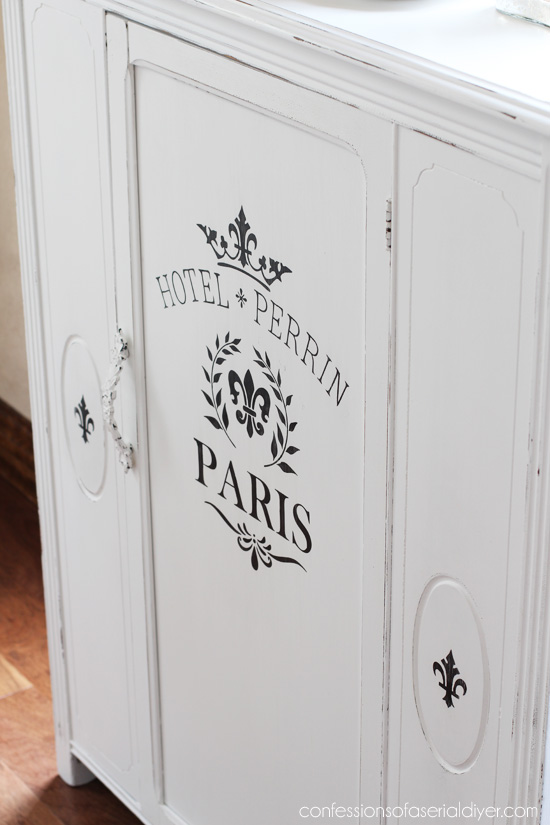 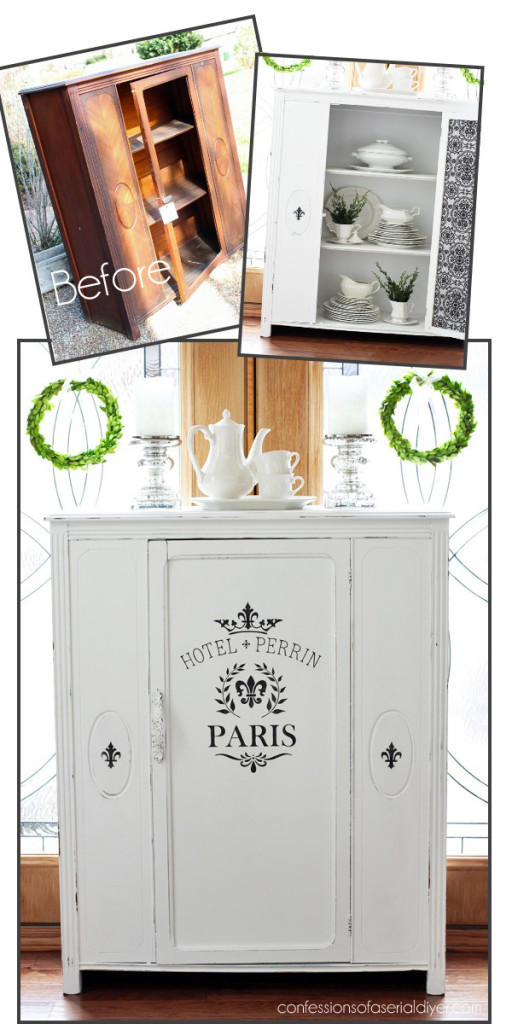 I was so pleased that the idea to replace the glass with hardboard worked out. It was a great inexpensive alternative to replacing the glass. This is one piece I considered bringing back home and keeping, but it only lasted a week before it sold. Probably just a well! 🙂

Hope you have a fantastic weekend!

I’ll be back on Tuesday with this kitchen dinette set that got a cottage-inspired makeover: 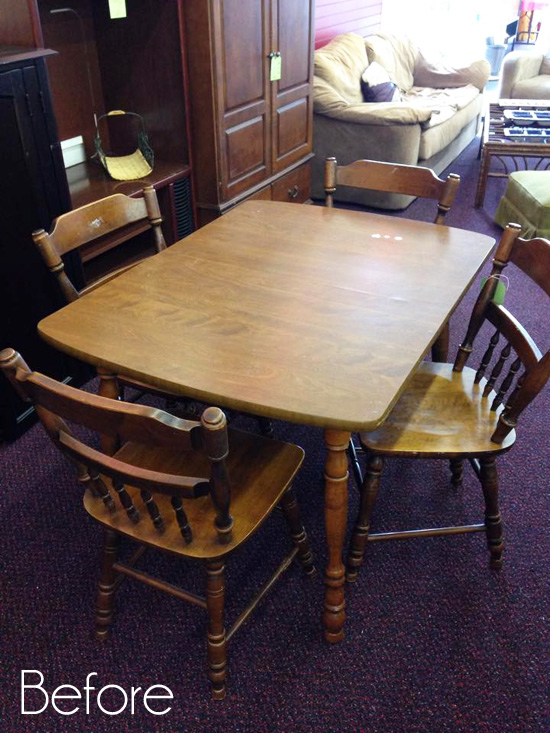 Can you picture it??

UPDATE: No need to imagine! Check it out HERE now!

Home » Furniture Makeover » The Antique Armoire with the Missing Glass

I just had to bring home this little cutie pie whe

This $5 thrift store mirror looks so much better t

This dressing table had all the issues! I’m so h

We will never forget. Ever. Thank you @paigepayne_

I shared another round of six smalls (mini makeove

Hey friends! How about a fall wreath made from a v

Got an old sewing machine table that could use an

It’s getting harder to find good furniture for g